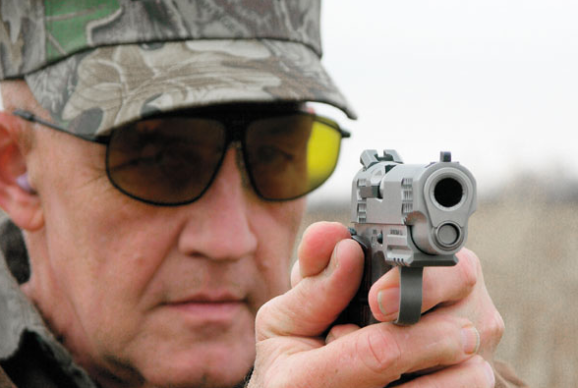 GORDONVILLE — We of the GCP – Gun Control Patrol – have a new martyr.

It could, should and would be a victim of a mass shooting — the events that have become so commonplace that they are barely mentioned on the nightly news anymore.

Or a victim of knee-jerk gun violence, like the black woman recently shot to death in Detroit for having the temerity to knock on a white person’s door for help after being involved in a car crash.

Or the toddlers who shoot themselves with the loaded guns kept their homes of their “responsible” caregivers,

But that pain is too recent and raw for all you Joe and Joanne Duh-Plumbers to wrap your mitts around.

So, as public service, we numb it up and dumb it down.

Enter Dick Metcalf, a man’s man seemingly born with a gun in his hand.

His curious case is an example of everything that has gone haywire in what should be a logical debate on the issue. We are left with a band aid to put on the figurative wound that is runaway gun violence, circa 2013.

Guns and Ammo Magazine, which bills itself the “world’s most widely read firearms magazine,” seemed to have turned a corner toward common sense when it printed an editorial – “Let’s Talk Limits” — by Metcalf, a contributing editor.

And if the magazine’s power trust was OK with those words, which are far from radical and merely mirror what the vast majority of Americans think and feel, they should have foreseen — and been prepared — to handle the inevitable storm from readers when the December edition rolled out.

In response to backlash described as “immense,” particularly from the bastion of utter stupidity known as social media — the place where the tail wags the dog in the world of mass communications — Bequette folded like a house of cards.

He posted a hasty apology to readers threatening to pull their subscriptions faster than they pull the trigger on an unsuspecting deer during hunting season.

“Dick Metcalf has had a long and distinguished career … but his association with ‘Guns & Ammo’ has officially ended,” wrote Bequette .

Setting himself up for Weasel of the Year honors, Bequette added: “In publishing Metcalf’s column, I was untrue to that tradition, and for that I apologize. His views do not represent mine — nor, most important, ‘Guns & Ammo’s. It is very clear to me that they don’t reflect the views of our readership either.”

Your magazine represents a readership imbedded in a subculture in which six percent of Americans are hunters.

Bequette, who was going to vacate his post on Jan. 1 anyway, then announced that he would be hastening his departure.

Who looks like the hero? I suppose Metcalf, but remember he was still a shill for this same pro-gun stance anyway. He just had some sort of burst of logic, which cost him his gig.

While magazines differ from newspapers, in that they are niche publications catering to readers paying for certain wants and needs, the real loser here is the First Amendment.

You know, the pesky one that guarantees free speech, including that of the press, as well as freedom of religion. Revolutionary in its time — unlike the Second Amendment, which merely mirrored some 17th century English law — is it also protected the right to peaceably assemble.

And there was one about petitioning the government for a redress of grievances.

We of the GCP have plenty of those.

Thousands upon thousands per year.

Enough that the Second Amendment should get a second look.

Dick Metcalf saw the light and put it into words.

Instead, he was shot down.

You may call it the price of doing business.

I call it a crime.