I thought the Eagles committed highway robbery in 2010 when they snagged him in the fifth round of the NFL Draft out of Florida, where he was the favorite target of roommate Tim Tebow for the two-time national champion Gators. 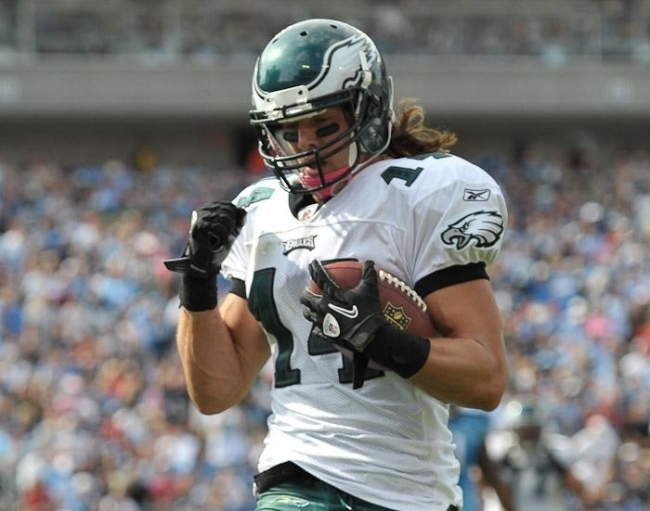 As a rookie, when Cooper was in the midst of what seemed to be a breakout game against the Tennessee Titans (during which Andy Reid managed to snatch a defeat from the jaws of victory), my exuberance led to a halftime Facebook status that Cooper was the object of my man-crush.

I was kidding, but the point was that I have always been in this kid’s corner.

I remember the recovery of the onside kick in the 2010 remake of the Miracle of the Meadowlands, and his highlight-reel touchdown catch last season, after coming back strong after from a broken collarbone.

While the Eagle Nation mourned the loss of Jeremy Maclin for the season, I saw an opportunity for Cooper – along with Damaris Johnson – to step up and fill the void.

I was encouraged to read quotes from Reid’s replacement, Chip Kelly, who seemed – through layers of Coachspeak, one of the few foreign languages I comprehend – to be giving Cooper a vote of confidence.

He talked about all the attributes I always saw – Cooper’s size, hands, downfield blocking (a must in this new offense) and physicality.

Seemed like opportunity had knocked — and fate was answering — for Cooper in a sport where back-up players keep their heads down and work at their craft, not wishing for injury to teammates but are keeping themselves ready for the inevitable.

His career totals of 46 catches and five touchdowns seemed likely to be topped in just one season.

And that fast, penalty flags all over the field.

He was caught on tape in the middle of a drunken tirade at a Kenny Chesney concert. He cursed at a security guard and used the “N” word. It happened weeks ago, but came out this week to the normal shock and dismay.

If you would have told me this had happened and to guess which white player would be guilty of something so moronic, Cooper would have been about the last guy I would have guessed.

He always seemed so laid back when interviewed, and maybe we were fooled by him saying semi-religious stuff about “being blessed” to have made a catch and so forth.

Cooper is a rarity in that he not only got his college degree, despite being a two-sport star pro in either football or baseball (ironically, he was drafted by the Phillies out of high school). And his degree was in family, youth and community services (a stark contrast to some of the laughable fields of study chosen – i.e. recreation — by athletes).

That should provide more of a window into his inner being, at least for those who want to dig that deep.

Giving him the benefit of the doubt, you would have to say he is a decent person. Whatever he feels in his heart and soul, he revealed that he is only human.

And he dropped it hard.

Now the question: Should his illegal procedure be followed by more penalty flags for piling on and for late hits from the peanut gallery?

“All men die, not all men live,” is his favorite quote, according to the team’s media guide. Should others now sentence him to live in infamy?

The guy is a football player – one who will be 26 in September.

Stop and let that sink in.

-More tapes of Richard Nixon’s psychotic rants have come out and the only response from the mainstream media is that they are “interesting.”

-Bill O’Reilly race-baits nightly on Fox News but because he hides behind buzzwords, as opposed to the “N” word, he is right there on the air every night.

-Rick Santorum said homosexuality equated to bestiality and he was a serious candidate by a major political party for president (winning four states, good for 248 delegates and 20 percent of the vote).

-Jesse Jackson, in 1983, referred to New York as “Hymietown” and his only excuse – in lieu of an apology — was that the conversation with the reporter was off-the-record. He also said that he was “sick and tired of hearing about the Holocaust.” A civil rights leader to this day, he was a presidential candidate, not to mention a Baptist minister.

Until we hold people like these to a higher standard, we should think twice about a football player who wasn’t allowed backstage at a concert and used a word he likely hears daily.

Even if Riley Cooper wasn’t “brought up like that” by his parents, which is what he says, the culture has brought the “N” word to lips.

Cooper works in an environment where that word, for better or worse, is probably tossed around more than the oblong pigskin that he is paid to catch 1,000 times in practice just so he can get his paws on IT a few times 16 weeks of the year during the season.

It likely comes from locker-room boom boxes, or from teammates rattling off the lyrics to the latest rap song (a genre Cooper also likes, along with country). It comes from joking around. It comes from quotes on tattoos on their muscled-up bodies.

And, let’s be honest, that word – or ones like it – can be heard in small groups of same-race players talking about others.

I have been in pro locker rooms. Trust me on this.

Sometimes athletes get caught doing whatever and they issue apologies that we dare judge as true, false or somewhere in between.

The sense here is that Cooper is genuinely sorry – and no, not just because he got caught, which is the cute riddle with no rhyme the public lynch mob enjoys.

From reports, he actively apologized. None of it was staged. The team fined him, after consulting with the NFL – an entity besieged with players doing a lot of more egregious things (including Aaron Hernandez, Cooper and Tebow’s college teammate) than a guy going temporarily insane at a concert.

The team is also going to send him to sensitivity training, even placing him on leave as of Friday (we’ll probably see him back sometime between the first and second preseason games, when other storylines emerge).

That’s more than teammate Jason Peters got from the team for allegedly drag racing and leading police on a car chase prior to camp. It’s more in the way of ramifications against LeSean McCoy for a Twitter war with the mother of his son, or for the alleged incident last December which involved a woman who said he, and others, assaulted her on a party bus he rented – while he was supposed to be preparing to return from a concussion – to go from Philadelphia to New York City.

Cooper lists McCoy as his funniest teammate. Maybe he thought the star running back was kidding when he came out and said he couldn’t respect Cooper anymore and felt that he lost a friend.

Surely, McCoy is not alone. Cooper has a lot of damage control ahead of him. And it’s all with a target on his back for a few seconds of indiscretion.

He has already punished himself. No matter what he says or does, probably for the rest of his life, he will be branded as “that guy.” There will be protestors at away games. There will be boos whenever he makes a catch.

It’s a bad situation, but there is no need to make it worse.

They say that those without sin should throw the first stone, and yet stones are coming fast and furious at Riley Cooper – at least until the next pro athlete steals the headlines for something stupid they said or did.

No one knows this better than quarterback Michael Vick, who spent 21 months in jail for well-documented transgressions, only to come out and be voted “most courageous” by his mostly black teammates.

Vick, along with the ultra-religious Jason Avant, have been the first to forgive – without necessarily forgetting – in the case of Cooper.

I’m still in his corner.

And I’m not ready to throw in the towel.

This commentary also appeared at phillyphanatics.com