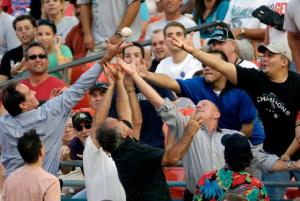 GORDONVILLE – While clicking around the television dial the other night, I must have been really bored because I stopped to watch a baseball game that didn’t even involve the Phillies.

I don’t mean to knock the national pastime, it’s just that sitting through a meaningless May/June contest and analyzing every strategic maneuver is not my ideal idea of fun.

So there I was, at least for one pitch, watching — and mostly waiting — while the batter stepped out of the batter’s box and back in while the pitcher shook off the catcher 54 times.

As per usual, that one pitch led to a foul ball into empty seats down the left-field line. And a mob of spectators ran towards the batted ball, as if miners in pursuit of a chunk of gold during the California gold rush of yore.

This oddity – this fascination with a baseball that you can buy for a nominal price in any sporting goods store – is one of many listed on my I-don’t-get-it list.

Also on the list is the fascination with vampire tales, English royalty, Hollywood sequels and golf (this thing at Merion can’t be over soon enough).

Shifting gears to more serious matters, I don’t quite get why any president of the United States – Barack Obama, at present — is automatically considered “the leader of the free world” upon election.

No, he is the president of the United States. That’s his job, 24/7. No moonlighting needed, or required, at least for this gig. Not until we get our own act together.

It is rather arrogant – a trait as American as baseball, apple pie and institutional racism – to assume we set the tone for anything on the world stage.

By definition, to be a leader, you have to lead in something. And according to “Ranking America,” we hold the top spot in:

-Spending on clothes and shoes

-Military spending and exports of arms and ammunition

By contrast to these dubious distinctions, we rank:

-70th in women in government

-22nd in freedom from corruption

-58th in commitment to change in energy consumption

And lastly, and most incongruous to the “leader of the free world” jazz (the real leader would likely hail from somewhere in Scandinavia, judging by the indexes), come these cold and hard factoids:

-22nd in freedom of the press

Talk about being kicked in a sensitive area, huh?

We do what we can, when we can, but let’s be real.

The events of last Sept. 11 in Benghazi were tragic, but president Obama could not have prevented them anymore than he could have prevented Hurricane Sandy or the recent spate of tornadoes (we also lead the world in those).

Radical Muslims will do what they do – commit violence in the name of religion – as much as the present-day force of nature known as climate-change-induced superstorms.

That’s a reality we have to live with, but instead some are sullying the victims’ memories by playing the blame game for political reasons. This is especially true – if not ironic – when you consider from where the venom is being spewed. When you look at the key areas where we don’t rank, and not even in the top 10, most of the shared blame can go the same Republicans who don’t let Obama come up for air.

For example, in the area of education – math, science and literacy – the states that bring us down are always red come election day.

Ditto on many of the quality of life rankings listed above.

And they have too much blood – American blood – on their paws to claw at Obama.

On the tragedy meter, not much ranks higher than mass shootings like the one in Newtown, Conn., which happened three months after Benghazi but has been swept under the rug because of the touchy dialogue it spawned on gun control.

In the wake of Newtown – and with knowledge that more than 30,000 Americans die by the gun each year (we also rank first in death by violence) – Republican leaders ignored public opinion in favor of self-interest and conspired to shoot down even baby steps toward sane gun control.

This makes them accessories, albeit after the fact, to the accepted madness. They have other fish to fry. Problem is, it’s not edible. Don’t be tempted to consume it. Four people, four people who understood the risks when they accepted their assignments, died in Benghazi.

That’s not to say it wasn’t a tragedy, or that it wasn’t something to learn from going forward, but you can only brace for it the way you can brace for a tornado or hurricane the next time one hits. You can’t stop them from happening again.

Right-wing pretzel logic to twist and turn it into something it isn’t – comparing it to Richard Nixon’s follies, that ended when finally caught with his hand in a cookie jar labeled Watergate — would be funny if it weren’t so sad.

When George “Wingnut” Bush was president, he enacted The Patriot Act in the wake of 9/11 (which happened when his team was asleep at the wheel, despite warnings of terroristic attacks within the country). The Republicans were quick to defend him, calling it necessary.

And yet, when Osama bin Laden, the mastermind of 9/11 was killed on Obama’s watch, they were short on praise and long on rolling their eyes when the president “spiked the ball” and dared do a touchdown dance (unlike the premature adulation of Bush and his “mission accomplished” ceremony to declare the Iraqi War over when that national heartbreak had just begun).

Now, in the wake of the Boston marathon bombings – which have quickly, and nefariously, joined Benghazi and co-replaced Newtown in the public’s psyche because it removes the gun issue and replaces it with bad guys with funny names who pray to Allah – they are critical of Obama for enacting similar, though more sophisticated, measures of keeping us safe from domestic terrorism.

The wrong-minded on the right will go to any lengths – suppressing the vote, calling the man-made human condition “God’s will” – to prove a point when they have none that are salient.

They say nope to hope.

They call themselves the “real” Americans – implying anyone not seen by their tunnel vision isn’t — and get away with it.

Their motives are as transparent as the painted smile on the face of a beauty pageant contestant, and yet many follow their lead.