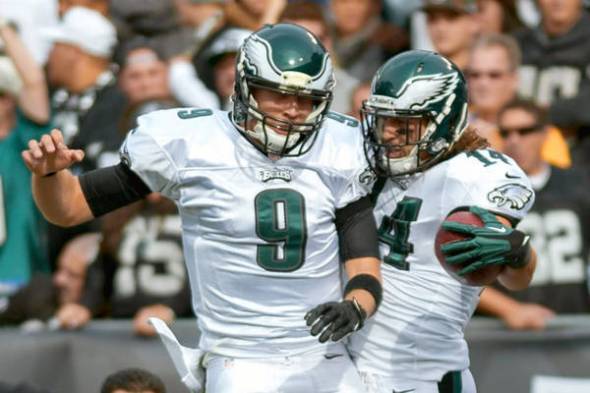 GORDONVILLE – Nick Foles has won three games as a starting quarterback, all of which have been on the road. In those games, he has completed 76 of 110 passes for 1,083 yards. He has thrown 12 touchdowns in those games with zero – yes, zero – interceptions.

The above was listed in the Daily News as an “Obscure Fact.”

I call it “telling.”

And it tells me that Nick Foles, coming off a game for the ages against the Oakland Raiders, is not some one-hit wonder.

If no one wants to go out on a limb, I will.

I have seen the future quarterback of the Eagles, and his name is Nick Foles.

If you don’t want to go there – at least not yet – saying you need to “see more consistency,” that’s your right.

You have a right to be wrong.

Just don’t join me on my Smart Car-sized bandwagon when this starts to bear itself out in the long-term. Don’t be like one of those people who say you saw Bruce Springsteen at the Main Point in Bryn Mawr, before he hit it big, when it was physically possible.

I am getting out in front of it now.

And I seem to be a lone wolf, which is fine.

In two of his last three starts, Foles has not only played well, but well enough to win NFC Offensive Player of the Week.

Let that sink in: Two out of three starts. Sounds pretty consistent to me. At least more than Michael Vick since his comeback dream season of 2010.

This season, Foles has also come off the bench after a Vick injury to procure a victory – on the road – against the New York Giants (those stats are not included the Daily News’ “obscure” fact, as they came in relief).

One has to think that a lot of the Foles antagonism – or outright bashing – stems from what has really been his only dismal outing. It came against Dallas in Week 7, in front of charged-up crowd at the Linc anxious for an overdue home win and a taste of “first place” in the NFC Least.

He had the ball, and he fumbled it, no doubt. That failure to rise up to the challenge was really a team effort – from top to bottom. That’s the way I felt walking out of the stadium.

The level of venom I heard toward Foles after was shocking, and showed a lack of football knowledge. While Foles missed open receivers, he found at least a good half-dozen others who dropped the ball. A few of those catches may have gotten the offense, and Foles, into the much-needed groove that high-speed offense needs to start rolling.

The whole game plan from coach Chip Kelly seemed out-of-sync. A week after running the ball effectively against a stout Tampa Bay defense, there was almost zero commitment to the run – even with the league’s leading rusher, LeSean McCoy, lining up behind Foles.

While the defense held Dallas and its high-powered offense to 17 points, keep in mind that the Cowboys were missing some players – including running back DeMarco Murray – and that the Eagles still couldn’t get off the field on some critical third downs.

Most importantly, and most forgotten or forgiven, was the horrid play of the offensive line that day. It was the unit’s worst outing of the year. Foles took some early hits, and I wouldn’t be surprised if he suffered a mild to moderate concussion early, and that set him for the more severe one he absorbed later.

For all these reasons, my conclusion in that the Dallas game was the exception and not the norm for Foles.

He was just not himself.

Foles, for all his perceived limitations, in terms of not running like Vick or throwing the deep ball with the velocity of Joe Namath, was always accurate and decisive.

That’s what I have seen from watching him in college, in two preseasons, the end of last season while playing in conditions that Johnny Unitas couldn’t have made work and in appearances leading up to Dallas.

And keep in mind, for all intents and purposes, it would be fair to call him a rookie. Until he starts his 17th game as a pro, that is what he is. Yes, he has two preseasons under his belt, but it was with two coaches with two diverse systems, neither of which he ran in college at Arizona.

I know you are antsy out there, people. I get it. I am, too. But let’s see the forest through the trees here.

What I see is a guy – if not run out of town for every rare errant throw or sack he takes because he is not an Olympic sprinter – who can be a starter in the mold of, say, Joe Flacco.

And you saw what Flacco and the Baltimore Ravens did last season.

I’m not all Folesed-up because I’m still riding the high of his seven-touchdown performance last Sunday in Oakland, an outing – complete with a perfect quarterback rating of 158.3 – that made him one of seven quarterbacks to throw that many touchdowns in a game.

I am still on a bit of a buzz from it, but what long-suffering fan wouldn’t be?

Truth is, I have always been in his corner.

I am just amazed that I have had to become like a publicist during the week after he turned in the kind of game he did in Oakland.

Immediately, detractors – most with hidden agendas, either from being Vick supporters on the run or in lust with the current bumper crop of college quarterbacks playing in systems designed to make them look like prodigies – sought to degrade the performance.

We need to address some of these skewed views of perceived reality before they drive me into a padded cell.

For one, Oakland is not “bad” team. The Raiders were 3-4, and were playing at home. They had a defense ranked in the top half of the league in most categories, and most of us expected a low-scoring game.

As for the fact that some Oakland defenders slipped on some of Foles’ touchdown throws, you just reveal your own ignorance. Defenders slip all the time. And quarterbacks, including many who have played here over the years (and had their numbers retired), still don’t take advantage. Moreover, when an offense is clicking the way the Eagles’ were last Sunday, situations like defenders getting twisted and turned around – and losing his footing – start to happen. It is part and parcel of having your opponent staggered and delivering a knockout out blow.

My response was that it we were going to see the Nick Foles closer to the one we saw against Tampa – and in relief against the Giants – because that’s who he is.

After a game for the ages, the absurd question has pervaded talk-radio and newspaper columnists, above whether we are going to see the Nick Foles we saw against Oakland or the one against Dallas.

Given the totality of his performances this season, it’s a question so silly that it doesn’t even deserve an answer.

The more realistic question: is there any reason, any at all, to see Michael Vick on the field again?

Foles should at least start until the bye week, two games away. In the unlikely event that he struggles badly and both games are lost, leaving the Eagles at 4-7 with five to go, maybe we think about Matt Barkley getting an audition like the one Foles got at the end of last season.

But I can’t see that happening.

The Eagles may not win their next two games, the ones leading up to the bye, but it’s highly unlikely it will be because of poor play from Foles.

It will be because of other shortcomings on a roster in need of a facelift next offseason. Drafting a quarterback in the first round? It would mean going through a learning curve with that quarterback while the rest of the offense gets one more year longer in the tooth while mediocre players line up on defense. It would be like digging for fool’s gold.

The fact that there is a bumper crop of college quarterbacks is still a good thing for the Eagles. It will leave other players – like a legitimate do-it-all outside linebacker, a head-hunting safety, impact nose tackle or interior offensive linemen – on the shelf at a better value.

They already have their quarterback.

He is tall, at 6-6. He may not be Fran Tarkenton, but he is more athletic than he is given credit for and can buy time in the pocket. He sees the whole field, makes good reads, has a quick release, is accurate and doesn’t throw a lot of interceptions.

His name is Nick Foles.

Sunday in Green Bay is only his 10th start, so there will be ups and downs, but I am confident it will be worth the ride.

I know it’s not easy, but try to put away your cynicism and enjoy it.

This column also appeared at http://www.phillyphanatics.com