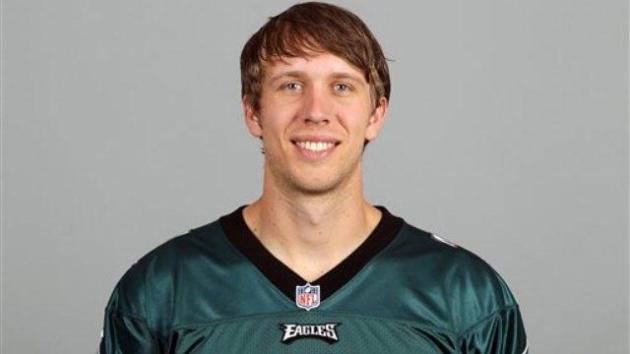 GORDONVILLE — High on the list of people surprised by the success of Nick Foles this past season might be Nick Foles himself.

That’s not to say he has self-esteem issues. He wouldn’t be able to complete a pass, even for a 2-yard gain on a third-an-12, at the NFL level without some faith in his own abilities.

He just doesn’t seem to come across with enough “it factor” to win over enough of a fan base that should be able to read through the well-crafted “St. Nick” act.

Foles chooses his words carefully, which may make him a yawner in a compare-contrast with, say, Seattle motormouth Richard Sherman. That ability to think before talking about teammates and opponents, lest his words come back to haunt him, should be encouraging. And yet, it seems to have the opposite effect.

Foles had to win his quarterback job – both in college and in the pros – by overcoming the “not athletic enough” tag, which one would think would play in blue-collar Philadelphia, where fans go apoplectic at the sights and sounds of a “Rocky” film clip on the stadium screen at Lincoln Financial Field.

Foles will be the first to tell you he is neither reading his press clippings nor resting on his laurels. He is surely working on nuances to make him better in 2014, his first full year as a starter in the same NFL system.

But one might be wise to suggest some other changes – if not to Foles, then to his agent.

Perhaps he could try consulting the “Sons of Anarchy” people for a makeover. He could definitely rock the Jax Teller look, right down to the tattoos and the rings that could be visible at press conferences. Maybe he could hang with actor Charlie Hunnam to learn some swagger.

Do this – and maybe a minor scrape or two with the law that could be handled with a fine (we don’t need him missing film time in jail) – and we might be onto something.

This is a joke – in more ways than one.

It shouldn’t come down to something so superficial.

Not when one considers his on-field achievements.

As a second-year quarterback in the first year of a new system, he took losing out on the opening-day-starter job in stride, staying quietly confident that taking care of his own world would yield results.

It doesn’t take much deductive reasoning to draw a conclusion that while Michael Vick was tabbed by Chip Kelly to start the season, if only to avoid an insurrection in a locker room that holds Vick in high regard, Kelly knew he would need Foles sooner or later.

It stood to reason that at least one of the three “I’s” – injury, interceptions or ineffectiveness – by the aging Vick would put Foles back in the saddle to finish up another season and, at the very least, audition for his new coach.

Foles never came out and said as much, but you knew it was in the back of his mind that he had to stay ready so that he could seize the inevitable moment.

It wasn’t a matter of if, but when.

After helping the Eagles save face – throwing a garbage-time touchdown pass to that superstar, Jeff Maehl – in an otherwise dismal loss in Denver to the eventual AFC champion Broncos, Foles had his number called the following week when Vick was hurt against the rival Giants in the Meadowlands, and he delivered a comeback win that ended a three-game losing skid.

Next was a highly efficient victory in Tampa Bay, to be followed by an off-kilter performance at home against Dallas with a chance to move the Eagles to 4-3 and put them in front in the weak NFC East.

At the time, the Eagles had extended their home losing streak to more than a calendar year, and the punch-drunk lowest common denominator among Eagles Nation had immediately written Foles off as nothing more than another Bobby Hoying or Kevin Kolb who should be custom fitted for a baseball cap and clipboard.

And nothing – not the seven touchdown passes at Oakland, the league-best quarterback rating (buoyed by a 27:2 touchdown-to-interception ratio) or the numerous statistical achievements that put him in franchise and NFL record books – could sway many of the unwashed masses.

Even as Foles prepares to appear in Sunday’s Pro Bowl, after being named to the squad as first alternate, they remain tepid in their enthusiasm, calling talk radio about players they once saw singe an inferior opponent in a collegiate mismatch.

It is as if they can’t forgive Foles for that one misstep in Game 7. It’s as if they still see him as the concussed Grinch who stole a perfect fall day, even though the offensive line had its worst game – failing to create holes for LeSean McCoy and establish a comfortable fortress in the pocket – and several passes that could have gotten the offense into its required rhythm were flat-out dropped.

He missed the next game with the aforementioned concussion. Vick started, but the hamstring gave out. The Eagles were adrift, at 3-5, at the midway point.

Foles started the rest of the games, and the Birds won seven of eight to finish 10-6. Even quarterbacks who take two seasons to throw 27 touchdown passes and one game to throw two picks get one-season passes from the fans for that.

But not here; not when you don’t have “it” going for you.

Foles came back and beat Dallas, in Dallas, to give the Eagles the division title in what – for all intents and purposes – was the season’s Super Bowl, but his game was only seen as “OK.”

In his first career playoff start, he rallied the Eagles against the New Orleans, only to watch helplessly – like everyone else – as the special teams and defense let it end on a field goal to lift the Saints to victory as time expired.

Critics point to two major lapses in judgment – holding the ball too long and taking a sack back to the edge of field goal range and an ill-conceived intentional grounding penalty – against the Saints as automatic deductions on his final grade, which is fair.

Talk still stirs of a mystical “franchise quarterback” – an error-free superhuman athlete that really only exists on NFL Films cut-ups – when one has already materialized in front of them.

One only needed to watch the playoffs after the Eagles were eliminated to see quarterbacks deemed to be of a more exotic species of signal caller who made a multitude of mistakes – some mental, some forced by defenses who happen to have a say in the matter sometimes – but weren’t judged as harshly.

There are some in the media, even though they should know better, who lob the same slow-pitch softballs at Kelly about Foles’ long-range future over center. Exasperated with the same laborious line of questioning, Kelly gives underwhelming responses that only fuel more speculation.

Maybe Kelly needs to learn the rules of NFL coachspeak and realize that the quarterback is different from, say, the long snapper. Instead, probably as he did at Oregon, he makes it known that all jobs are open and does not expect to have answer the same question a zillion times.

And then there are the sexy names coming out of the college ranks this year. Three quarterbacks – Louisville’s Teddy Bridgewater, Texas A&M’s Johnny Manziel and Central Florida’s Blake Bortles – are likely to go well before the Eagles pick at No. 22 in the first round. Two other big-name guys – Fresno State’s Derek Carr and Clemson’s Tajh Boyd – have seen their stock drop and could easily be there.

Would they pounce if a top guy slid? Would they mortgage other picks and trade up? Would they take Carr or Boyd at No. 22?

It’s kind of like asking if they would take a running back, even though they have McCoy.

But it’s highly unlikely, given the Eagles’ other needs heading into a season when a tougher schedule means a replication of 2013 is anything but assured.

If you subscribe to the belief that it was a lot of smoke and mirrors in 2013, then luxuries at skill positions where they are set are something they cannot afford.

After two years of getting no bounces or breaks – at all – the Eagles seemed to get their fair share this past season. There were some injuries, but nothing reaching the obnoxious level of the previous two years that made one wonder if the team was placed under a curse the day vagabond quarterback Vince Young called them the “Dream Team” prior to the 2011 season.

The most significant injury was to Vick. It was a pulled hamstring that he could have played with – at half-speed – if there were no other alternatives.

But there was an alternative.

It was Nick Foles.

Sorry if he is St. Nick and not Jax Teller.

Here are some others.

Foles is playing this year at $750,880, which equates to fast-food pay for someone we can conservatively call an up-and-coming quarterback (Note: Even if the Eagles’ brass wanted to take his contract and tear it up so they can negotiate a long-term deal, they are prohibited from doing so.).

This is where common sense meets dollars and sense. Even if Foles isn’t the quarterback Kelly ultimately wants for his system, the NFL is a business. He can’t just go recruit three more quarterbacks and let them all battle it out in spring practice.

Even if Foles weren’t coming off a near-perfect season, it would be bad business to add another high-end quarterback prospect when there are holes that need to be filled – in free agency, but mostly the draft – for the Eagles to rise to next year’s set of very real challenges.

If there is a step back in Year 2 of the Kelly Era – even cosmetically, because of the tougher schedule and/or some bad breaks and torn ACLs – it likely won’t be because of Foles.

He makes too many right decisions and not enough wrong ones, on and off the field.

And in the unlikely event that a decline is his fault, go ahead and clamor for that bumper crop of quarterbacks – UCLA’s Brett Hundley, Florida State’s Jameis Winston and Oregon’s (and Kelly’s) Marcus Mariotta, as well as others who don’t yet have the national profile – awaiting in the 2015 draft.

Who knows? Maybe one of those guys has “it.”