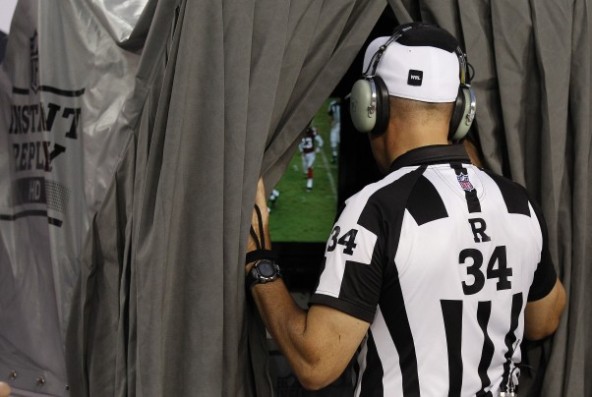 Let’s put it to the test.

When my Internet trolling led me to the headline that that NFL was about to convene to consider more rules changes, my gut screamed “nooooooo” … kind of like your pooch running into the street with a bus coming. (This actually happened the other day, but said school bus was stopping anyway and Rex did a U-turn and came back on his own, realizing that a walk was no fun without yanking my shoulder from its socket).

If there is anything the NFL doesn’t need, it is more rules about its rules – unless they are passing a rule banning future rule changes (except one to address my pet peeves of players showing up officials by making official gestures for what they think should be called and announcing whole teams, instead of individual starters, at games).

But upon further review, not all proposed rule changes are created equally. With that – presuming you can put down your NCAA bracket, seeing if one school you couldn’t find on a map beat another one you never heard of before and never will again – join this mad scientist in his lab as he places the proposed changes under the microscope.

Reaction: Well, this would bode well for touchback-challenged Alex Henery, the Eagles’ kicker, but it seems a bit extreme. It didn’t seem too long ago that the league moved kicks from the 40 to the 35 to avoid touchbacks (I remember lining my men up at the 40 in electric football). Hey, NFL, let’s cut to the chase. You want to take kickoffs out of the sport? Just do it then. I grow weary of your foolishness.

Reaction: About time! (Note: I don’t come by exclamation point easily, either.)

Reaction: I shouldn’t even comment, because this is a done deal. It’s more about time and money than the risk of injury, despite how it will be spun. Honestly, since I’m certifiable, I enjoy preseason games. It’s only rookies and journeyman on the roster bubble who are playing that late in the game anyway, so why not have a chance to get a longer looksee at them? I get the final preseason game, when rosters have been trimmed, so maybe only have overtime in the first two preseason games. In the third, maybe if one or other teams have already been in one, then they can opt out of it.

4. Extending the goalposts vertically by 5 feet on each side.

Reaction: Hey, why not have them moving, too. It can like a game at Chuck E. Cheese’s.

5. Moving extra-point attempts to the 25-yard line, making it a 43-yard try. (This was proposed by the Patriots.) The competition committee separately is proposing one preseason game this season where extra-point snaps will take place from the 20.

Reaction: Proposed by the Patriots, because they are annoying like that, this is a bit extreme. I can live with the counter-proposal of the competition committee to make a preseason the guinea pig, but only from the 20. Maybe the whole idea will die a slow death from there.

6. Adding six cameras to all boundary lines on the field to supplement TV camera angles.

Reaction: The more eyes, the better.

7. Allowing any officials’ decisions to be challenged by coaches, not just specific kinds of plays.

Reaction: This goes to a deeper issue. The league needs to re-evaluate how its games are officiated. The old methods, in a changing sport, are increasingly inefficient. This would be a start. Not a destination, but the start of a journey.

8. Protecting players from getting their legs rolled up on from the side — and not just from the back — as a penalty.

Reaction: Since this happens by accident most of the time, I’m not sure how it can be regulated, but leave it to the NFL to fake concern about injuries with rules that will affect outcomes of games and not reduce injuries at the same time.

9. Allowing the referee to confer with members of the NFL officiating department in New York at the league office during replay reviews.

Reaction: Stealing from the NHL again, eh? Be careful what you wish for, as those Canucks north of the border need some fine-tuning as well (just ask the Flyers). That aside, absolutely.
10. Changing review rules on the recovery of a loose ball — aka, the “NaVorro Bowman rule” from the controversial NFC championship game non-call — in the field of play.

Reaction: Yes, yes, yes. Pet peeve of mine for years. This would necessitate an overdue reorganizing the replay section of the NFL rulebook, meaning two for the price of one.

11. Keeping the clock running on quarterback sacks at all times of the game.

12. Changing pass interference so that it can be called within a yard of the line of scrimmage.

Reaction: Something to consider, but it doesn’t seem like a pressing matter.

13. Enforcing defensive penalties behind the line of scrimmage from the previous spot, instead of from the end of the play or from the spot of the foul.

Reaction: Never quite understood why it is done how it is now in the first place, so … come on with it.

The above are all on the field of play. What also intrigued me, and hit at some questions I have longed to see answered, are off-the-field issues that will be addressed this week at the NFL Annual Meeting in Orlando.

Here is a look at the few being bandied about that won’t put you to sleep:

1. Raising the number of active players on game-day roster from 46 players to 49 for non-Sunday or Monday regular-season games, excluding Week 1. The league has Thursday games throughout the season, as well as some late-season Saturday contests.

Reaction: I have a major issue with Thursday night games to begin with, and rarely – if ever – is there a well-played one (at least by both teams). And the league, claiming to have an interest in player safety, has major cojones to even have Thursday games for teams who aren’t coming off their bye weeks. The human body wasn’t meant to play football on a Sunday and again on a Thursday. So, yeah. Heck, yeah. Not the ultimate solution, but at least it is the recognition of a problem.

2. Raising the practice squad roster size from eight to 10 players.

Reaction: There are rumblings of a new spring league, the A11FL, so player development is essential. Why not? No downside.

3. Allowing teams to test and time up to 10 draft prospects at their own facilities, and allowing any rival team to come witness the testing and timing at the other team’s facilities.

Reaction: This is a snoozer, and was not going to make the final cut here, but it was proposed by your Philadelphia Eagles. Way to be on it, boys.

4. Allowing a team with a retractable roof to open or close its stadium roof at halftime, and not having to determine before the game whether it will be open or closed.

Reaction: Makes sense in theory, but it opens the door to controversy.

Welcome to the big-time.

This column originally appeared at http://www.phillyphanatics.com