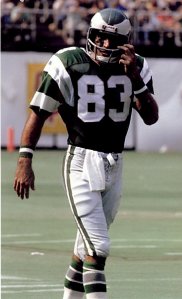 GORDONVILLE – How does Jeremy Maclin look, and feel, after the second major knee surgery of his football career?

Will the defense rest, or surge forward, with free agent signee Malcom Jenkins taking over as the captain of the secondary?

These, and other questions, have been exhausted – sometimes so much that they have gone into auto-pilot – just during the OTA workouts that were open to the media at Fort Chip Kelly (i.e. the Novacare Complex).

With training camp around the immediate bend, there are enough side stories that as many reporters and bloggers – and cameramen who could audition as lead blockers on short-yardage situations – will be initially around the lockers of players whose names are barely known to the casual fan as those of Foles or Maclin or LeSean McCoy or Brandon Boykin or Fletcher Cox or DeMeco Ryans.

And while every player who made it to this level has a tale to tell, some have journeys – and backgrounds – that are more compelling than others.

Part of the urgency for the all-out blitz is to get these stories told is not only while they are hot, but also before they rot.

Before the first round of cuts, hope is in the air.

We are talking about some longshots whose ceiling of expectations is landing on the practice squad, or doing enough positive things to end up on the practice squad of another team – or to get a call from the CFL, Arena League or one of the ancillary pro leagues that are popping up.

In some cases, if only from being in the right place at the right time, there are actually guys who could be Philadelphia Eagles this season or who are seen as worthy of long-term investments.

It’s a tough task, getting onto Kelly’s radar, as we are talking about an ascending team that went 10-6 and won the division last season with a young nucleus.

But, in some cases, difficult is a long way from impossible. The odds are that there will be disheartening injuries and surprises cuts, opening the door of opportunity for those who dare to knock.

Given this reality, consider this look at 10 intriguing VPTs (Vince Papale Types) as a public service. An informed fan base is better than having to ask “Who is this guy?” when a player makes a key special teams play in the ninth game of the season. You don’t want to be “that dude” when watching a game with your buddies, do you?

So get ready to run through the gauntlet of snapshots of the longshots:

Alejandro Villanueva, DE, Army: This could be where it begins and ends. The former wide receiver doesn’t dwarf that of the others only because of his stature (6-foot-9, 277 pounds), but also in overcoming adversity. A true war hero, with seven decorations to prove it, his attempt to make it the NFL is beyond compelling. Whether it is eventually fodder for Hollywood or the Hallmark Channel is up to him.

At Army, Villanueva was a defensive and offensive lineman who moved to receiver as a senior and caught a team-high 34 passes (five touchdowns) before heading into real combat as a Captain. His size alone would have likely gotten him a look as a tight end project coming out of school, but he had a commitment to serve his country. With the Eagles, whose 3-4 defensive scheme requires tall defensive linemen bookending a stout nose tackle, he is getting a chance to fulfill his dream at his original college position. The early reviews on a player who hasn’t played football since 2008 are long on how hard he is working, and how he is a quick learner, but short on lauding any standout skills (“intriguing” was the best Kelly could muster).

The Eagles did right by Villanueva by allowing him to pursue his dream in the birthplace of the country, but they have put themselves in a bit of bind. If he doesn’t stick, he goes back into active duty. It is unclear if that applies to the practice squad, though, and it is unclear if Villanueva himself will consider it dishonorable to be stashed on injured reserve with a contrived injury. He will need to convince the brass to keep seven or eight defensive linemen, as opposed to six, and will have to then beat out the likes of fourth-round pick Taylor Hart of Oregon and last year’s seventh-round pick, Joe Kruger, who spent last season on injured reserve and returns more polished.

Because none of the others are war heroes trying out for the NFL after four years of active duty, they are listed in alphabetical order:

Beau Allen, NT, Wisconsin: The Academic All-Big 10 choice who apparently has been on Kelly’s radar for a while, was picked in the seventh round. But Allen, literally and figuratively, fills an immediate void with his girth (6-2, 333 pounds). A colorful character with Thor-like blond locks dangling from him helmet, Allen may end up contributing as much as any draft pick, at least on the defensive side of the ball. That includes first-round pick Marcus Smith, who may be deactivated early on while learning the nuances of playing outside linebacker. Allen, meanwhile, is pure run-stuffing nose tackle. His presence will, at the very least, save wear and tear on second-year starter Bennie Logan (6-2, 317). At the most, Allen could play enough snaps on running downs that the smaller-but-quicker Logan, a third-round pick last year, can line up at end.

Michael Bamiro, OL, Stony Brook: A year ago, the NFL admittedly goofed by not allowing Bamiro declare for the draft, during which it was purported that he might have been a middle-round pick. He was declared a free agent, and the Eagles won a bidding war. What they soon learned about the small-school product was that while you can’t teach size – he’s 6-8, 340 – you also can’t iron out rough edges. He was cu,t but brought back onto the practice squad. This year, during the OTAs that he missed a year ago, Bamiro was shuttled between guard and tackle. Could be a sign they see versatility or it could mean that they don’t see him having the footwork to be an NFL tackle. However, with right tackle Lane Johnson suspended for the first four games of the year, Bamiro is one of several linemen with a shot to hold down the job. Opportunity knocks. Will he answer?

Trey Burton, WR/TE, Florida: As a Gator, Burton was an “athlete” without a position. And if you can’t find a niche at the college level, it should be nearly impossible in the NFL. But as a talent who was recruited asa  running quarterback and eventually lined up at every skill position, one would have to think Kelly’s wheels were turning in double time when the Birds pounced on Burton after the draft.  He is 6-2, 225, and ran a 4.54 40 at the combine. That made him one of the bigger-but-slower receivers or one of the smaller-but-faster tight ends. If Kelly can figure out a role for a guy who scored 20 college touchdowns in a variety of ways, he could factor in the offense down the road – even if that is a year or two down the line. How he is utilized, and how much, will be intriguing to watch for those who actually maintain focus during preseason games.

Henry Josey, RB, Missouri: Another one of those guys with a back story that will elicit justifiable sympathy. Back in 2011, Josey (5-8, 195) was in the midst of a dream season – sitting at second NCAA at 8.1 yards per carry – when the dream turned a nightmare. He suffered a knee injury so severe that it was considered a medical miracle when, after a year away, he played in all of Missouri’s 14 games last season. He put up numbers (1,166 yards rushing, 14 touchdowns), but concerns about his knee surely led to him going undrafted, which may have made him regret not returning for his senior year. But when the Eagles traded away Bryce Brown, moving up in the seventh round to grab Allen and also picking up a future middle-round pick, he seemed like a logical priority post-draft free agent. The job is there – behind McCoy, Darren Sproles and Chris Polk – but Josey will not only have to stay healthy and grasp the system, but also fend off second-year man Matthew Tucker, who made the team last year as an undrafted free agent out of TCU, and fellow undrafted rookie David Fluellen.

G.J. Kinne, QB, Tulsa: Kinne was working on an oil rig when he came to camp last year and impressed Kelly when he volunteered to play special teams. He was cut, but brought back to the practice squad and kept throughout the offseason, which would indicate they made have some long-range plan for Kinne to be a the third-string quarterback of the future. He will enter camp behind Foles, Mark Sanchez and Matt Barkley and isn’t likely to move up the depth chart. But considering how well he knows the system by now, and that Sanchez is only here on a one-year deal, the thinking could be that Barkley moves up to No. 2 in 2015 and Kinne becomes the No. 3. A mobile quarterback with some zip on his passes, Kinne could play well enough in the early preseason games to stick around again for another year. Either that, or go back to the oil rig.

Travis Long, OLB, Washington State: Right now, Long could go down to Pat’s or Geno’s for a cheesesteak and not be asked for an autograph. When the dominos fall at outside linebacker, Long – after living the life of Job in college, suffering injuries that kept him being a middle-round pick (or even being signed immediately after the 2013 draft) – remains on the radar of the coaching staff after year on the practice squad. He has the size (6-4, 255) and toughness, and now has the scheme down. If he shows up on special teams, the higher-paid Brandon Graham could be out of work.

Daytawion Lowe, FS, Oklahoma State: Somebody will realize that two plus two equals four soon enough and run up to the undrafted free agent soon enough with a notepad in hand. With the exception of Josey, Lowe was the highest rated of players signed after the draft. And he plays safety, a position of need. Write the name down and tuck it away.

Ifeanyi Momah, WR. Boston College: He’s back. The wide receiver landscape for the Eagles is vastly different this year, and the 6-8 Momah, who was a raw project the Eagles brought to camp last year and cut before the season, could benefit. With Sproles and tight end Zach Ertz able to line up at more than just their traditional positions, the Eagles may not keep more than five receivers on their active roster. That would necessitate extra sets of hands – like Burton – for the practice squad. You can’t teach size (see Bamiro), so Momah has a legitimate shot to at least be in the program for further development. If he can’t stick this time, though, don’t expect any third chances.

Carey Spear, PK, Vanderbilt: The story line that won’t die, unless the rookie free agent kicker dubbed “Murder Leg” pulls the plug himself. Spear was an OK kicker in college, but only worked out for five pro teams and went undrafted. Some of his tackles went viral on You Tube, but one has to wonder about his leg strength on kickoffs if he had to make so many touchdown-saving stops. As a field goal kicker, he did well enough in OTAs to stick on the team for camp, but remains token competition for third-year kicker Alex Henery, who is coming off a sub-par season but remains the most viable option.

This analysis originally appeared on http://www.phillyphanatics.com on July 20, 2014.