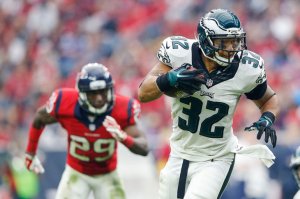 GORDONVILLE — Former Eagles coach Buddy Ryan had a saying that stats were for losers.

In a way, the cartoonish caricature of a coach had a point.

In football, perhaps more than any of the other major sports, there is no cause to pause in the heat of battle to play actuary. It detracts from zeroing in on the intense chess match between coaches and coordinators to get the edge in match-ups.

Even an era when playing stat-based fantasy football seems to be a court-ordered activity, doing so could be paralysis by analysis.

But the problem with Ryan’s hypothesis was that he didn’t even want to address questions about the stat sheet after the game was over, let alone when trends were forming over the marathon that is a season.

Stats are for losers?

Could be why Ryan lived up to his “you got a winner in town” self-billing, but also why Buddy Ball did not equate to any triumphs in three postseason tries.

There is a time and a place for an in-depth look at the numbers.

Merrill Reese going apoplectic because LeSean McCoy just went over 100 yards in a game very much in doubt? Not the time or place.

After the game? Sure.

At the midway point of the season, when enough water has passed under the bridge to discern between anomalies and trends? Not even a question.

First and foremost, the Eagles are 6-2 halfway in to what has been a somewhat surreal 2014 season.  Winning more than losing is the most important number (and Ryan’s point, had he been more eloquent).

It is a mark achieved despite two season’s worth of adversity, mostly in the form of injuries to vital personnel, and puts them on a pace to finish 12-4 – a good two to three games ahead of the projections of pundits.

Unless the Eagles lose twice to the Dallas Cowboys, who sit a half-game back in the NFC East at 6-3, a 12-4 mark would easily mean a repeat as division champs and a probable first-round bye.

But it’s not that simple.

As we crunch the numbers with more of a jackhammer, we realize the Eagles will need to raise the bar – on both sides of the ball – in order to maintain the current bottom-line pace.

The most glaring statistic is their 21 turnovers – succinctly termed as “living on the edge” by current coach Chip Kelly. At minus-10 in giveaway-takeaway, they are the company of the league’s bottom feeders (tied for second-to-last with winless Oakland, one notch ahead of the one-win New York Jets).

Turning the ball over more than you get it back is a recipe laced with toxins in the NFL, and yet the Eagles have managed to eke by and defy logic.

The Eagles have compounded the issue with only four interceptions. Three came in the first three games from free safety Malcolm Jenkins, who took one to the house. The only since was when DeMeco Ryans picked off Houston’s Ryan Fitzpatrick and proceeded to fumble it right back in the midst of tearing his Achilles in what could be a career-threatening injury.

In order to break even, the Eagles will need to force 10 more turnovers than they commit in the final eight games. It would be encouraging if some came by way of interceptions from the cornerbacks. For example, slot corner Brandon Boykin had six picks a year ago. He, along with starters Cary Williams and Bradley Fletcher, has yet to commit a theft.

Almost as much so as how generous the Eagles have been with the pigskin.

Last year, they gave it away a grand total of 19 times. A big part of that was Nick Foles (left) throwing just two interceptions, against 27 touchdown passes, after he took over as starting quarterback for Michael Vick.

This year, as Foles exits for as long as six weeks with a broken collarbone, he has thrown 10 interceptions (against 13 touchdown passes) and has also fumbled the ball away three times.

In last week’s win in Houston, Mark Sanchez threw two touchdowns but also two picks. There is a collective sigh of relief that a more-than-competent quarterback takes the helm in Foles’ stead. And yet, the sobering reality is that Sanchez has thrown more interceptions (71) than touchdowns (70) in a career that saw him take the Jets (coach by Ryan’s son, Rex) to a pair of AFC title games before being run out of the Big Apple.

The Eagles, if they are to get where they want to be by season’s end need to take much better care of the football. It would be fair to say that anything more than 4-6 total turnovers in the last eight games would spell doom and push them over the “edge.”

They may have to take a bit of air out of the ball in order to protect it.

Band on the run

With the offensive line as intact as it is going to be. Evan Mathis and Jason Kelce are back from the MASH unit, but Todd Herremans in done for the season, meaning either Matt Tobin or Andrew Gardner will play right guard while the other will be the first man off the bench for all spots except center, and the Eagles are going to have to get back to basics and run the ball.

While it could be argued that Sanchez does some things better than Foles, who seemed have lost last year’s confidence as a passer and reader of defenses, he lacks Foles’ arm strength on deep throws and doesn’t have the same touch.

Kelly’s offense is practically scripted for the quarterback to have a QB rating in the ballpark of 100, particularly with the return of Kelce taking the wraps off a screen game that had been practically shelved.

That will be where Sanchez will need to go after a passer rating of 89.6 last week.

The receivers are currently on pace for big numbers. Jeremy Maclin, a leading candidate for NFL Comeback Player of the Year, is on pace for 90 catches for 1,580 yards and 16 touchdowns. Although it appears Riley Cooper isn’t the same player as last year, he is also on pace for a career-high 62 catches. Rookie Jordan Matthews is on pace for 64 catches and 6 touchdowns.

Other than maybe Cooper (left) upping his touchdown projection – after eight last year, he is one pace for just two – it may not even be healthy for those projected numbers to be reached in the season’s back end.

Instead, increased touches from the backs – running and in the aforementioned screen game – could lead to more consistency and cohesion and fewer struggles in the red zone.

That would mean McCoy, currently on pace for 1,244 yards, finishing with more than 1,400 yards and getting into the end zone a few more times (he has just one touchdown this season, as compared to 11 last year (9 rushing, 2 receiving).

It means Chris Polk, who scored his first touchdown on the season last week, getting increased work as a power back when defenses are worn down from trying to corral the elusive McCoy. Kelly hinted at Polk’s hidden value after the win in Houston, but that pesky heat-of-the-battle thing could cause amnesia, particularly in the red zone.

At present, at 53.2 percent (even after going 3-for-3 last week), the Eagles still rank next-to-last in the league in red zone efficiency.

And then there is the X-factor, all-purpose back Darren Sproles. Despite missing a game in the Arizona that the Eagles may have won with him, Sproles projects to 456 yards and 6 touchdowns, along with 40 catches. Maintaining those numbers, along with his conference-best punt-return average of 15.4 would be crucial in terms of moving the chains and taking pressure off of Sanchez.

Additionally, the return of Mathis and Kelce might take the reins off the tight ends a bit. Zach Ertz was expected to have a breakout year, but fellow tight end Brent Celek has played an equal number of snaps so far before of his superior blocking skills. A big second half from Ertz – currently on pace for a middling season of 50 catches for 716 yards and four touchdowns – would balance out the attack, and help in the red zone, even if it means less dink-and-dunk  grabs for the receivers.

Case for the defense

Going the other way, the Eagles have been sacking the quarterback well. Perhaps a few more putdowns from the down linemen – only Vinny Curry has more than 1.5 sacks (from another reserve, Brandon Bair), with four – would be nice, but outside linebacker Connor Barwin is on pace for 14 sacks while the platoon of Trent Cole and Brandon Graham is on pace for a combined 13 sacks and 12 forced fumbles.

It remains to be seen if the devastating loss of inside linebacker/spiritual leader DeMeco  Ryans will mean more or less blitzing from emerging star Mychal Kendricks from the inside linebacker spot. Despite missing a good chunk of the first half of the season, Kendricks has two sacks. It is not unrealistic for him to have at least a half-dozen by season’s end.

On special teams, it is hard to ask for much from rookie Cody Parkey, who has been next to perfect (15-for-16). The concern would be the colder weather and swirling winds. The Florida native kicked at Auburn in the state of Alabama. Punter Donnie Jones remains the consummate professional.

Rookie Josh Huff seems to be returner at present on kickoffs, even though Polk took one 102 yards to the house and averages 40.4 yards on 5 returns (Huff averages 22.3 on three tries).

Meeting the statistical standards, with a difficult stretch of road laid out by the league’s schedulers, is difficult.

Not if you strive to be winners.

With a winning formula.

This article originally appeared at http://www.phillyphanatics.com