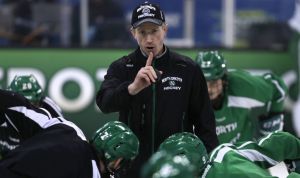 GORDONVILLE — On the surface, Marcus Mariota and Mike Babcock have little in common.

Mariota is from Hawaii, and plays football. Babcock hails from Manitouwadge, Ontario. He coaches ice hockey, a sport that would seem as unlikely to thrive in Hawaii as surfing would in Canada.

But both were fed as red meat to the ravenous Philadelphia fan base as messiahs for the two teams that have gone the longest without championships – the Eagles (1960) and the Flyers (1975) – in the city of otherly angst.

And they were done so by a media that should be fined – or maybe forced to don those fluorescent jackets like first-time DUI offenders and cook and serve cheesesteaks at the Pat’s-Geno’s Mecca in South Philly – for being irresponsible to the disappearing craft of fair, impartial and accurate journalism.

Yes, Mariota was a hand-in-glove fit for the Eagles, as no other team’s system – for obvious reasons – matches his skill set. Drafted second overall by the Tennessee Titans, Mariota has almost been set up to fail, meaning the Eagles could catch the coveted quarterback on the career rebound when his rookie deal is nearing an end in four years.

Even with that being a given, the odds of him coming to the Eagles in a draft day trade were probably less than Chase Utley winning the batting title.

And yet the pot was stirred right up until he was drafted by the Titans, and the flames were even kindled a bit in the days after (even though the NFL rarely sees trades involving just-drafted players not from the Royal House of Manning).

As far as Babcock goes, his name was fluttering around William Penn’s three-cornered hat as soon as Craig Berube’s stint as the Flyers’ 18th coach ended after a season laden with enough close losses that any and all coaching decisions were placed under the magnifying glass.

But nobody bothered to read the small print.

If Babcock was going to move on to his next challenge – after building his long resume with the Red Wings in Hockeytown, U.S.A. (a much nicer way to describe the economic ghost town that Detroit became) – it would be with, at the very least, an officially unofficial “coach/general manager” name plate on his desk.

In Philadelphia, where general manager Ron Hextall has tentatively been given as much free reign as Grand Puba Ed “Al Davis” Snider is able, a power-sharing agreement in what was going to be Hextall’s first major decision in shaping the team in his own image after a year of toddler steps (a promising 2014 draft, a few deals) was not a hand-in-glove fit akin to Mariota playing for Chip Kelly.

To quote the late Johnny Cochran, “if it doesn’t fit, you must acquit.”

Earning the acquittal here is Hextall, not the media – including the alleged “insiders” (anyone with a Twitter account) and the dudes who like to hear themselves yammer on talk-radio – which is guilty as charged for creating stories where there were none and not logically thinking through their concocted scenarios.

The logic – or lack thereof – with Mariota was that Eagles coach/general manager Chip Kelly would “find a way” to land Mariota, his college quarterback, as if it were as easy as Fonzie tapping the juke box for the song he wanted to hear so he could dance with the girl of his choice.

With Babcock, it was tunnel vision – and a true lack of overall hockey knowledge – in seeing the Flyers as the one and only pathway for Babcock.

The proof of the lack of hockey awareness was the first online headline about the hiring of Hakstol, which called him a “no-name” coach.

Anyone who at least casually follows college hockey should know that he is as big a name in his sport as any heavy hitter in college basketball or football – not to mention that college hockey in places like North Dakota is as engrained in the culture (with rabid fans with painted faces and cheerleaders) as football and basketball are in the mainstream.

The “no-name” mistake would be semi-excusable if not for the fact that North Dakota was on the ice at the Wells Fargo Center for the Frozen Four just a year ago.

He may not have been Babcock, or a recycled head coach making his next stop on the NHL carousel, but he carries more name value in legitimate hockey circles than most NHL assistants and/or AHL or junior-level head coaches.

And, with Hextall, Hakstol fits likes the hand in a glove that Mariota would have – if Kelly were able to pull a rabbit out of his visor.

The Hakstol hiring rings true with the rebuilding plan that will continue to unfold as veterans are slowly shed from the Flyers’ roster and are replaced by a semi-stocked stable of prospects that will, hopefully, be helped with two more first-round picks next month.

For thinking outside of the box (Hakstol is the first college-to-first-NHL-job head coaching hire since “Badger” Bob Johnson went from Wisconsin to Calgary before moving on and winning the Stanley Cup in Pittsburgh) and being ahead of the curve (“real” insiders see this hire as a budding trend), Hextall should be lauded as much as those who created a superficial story should be taken to task.

The column originally appeared at http://www.phillyphanatics.com