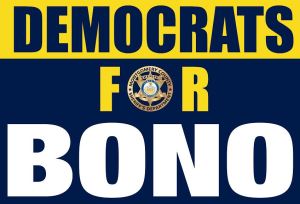 GORDONVILLE — It has been more than three decades of political awareness than stood before a mirror, with a picture of Bobby Kennedy behind me, and made the following vow:

And I have, more or less, stayed true to these ideals. When I send in a play from the sidelines, it was from the Liberal playbook.

My first presidential election was 1984, and I voted for Walter Mondale. I have never voted for a Republican for president.

Yes, that means I voted for Barack Obama twice. And, while I don’t agree with everything he has done, I would do it again.

Because I can’t, I’m “all in” for Bernie Sanders. If his long-shot bid fails, I have no choice but to go with Hillary Clinton over anyone currently in the GOP field.

Sorry if some of you find that as a turnoff, but I believe honesty is the best policy. When you are not in a vicious cycle of telling lies to get out of the lies you told before, your days are easy and your nights are not as sleepless.

While we are being honest. I will admit that I was as bloodthirsty for revenge as any red-blooded American after 9/11. I remember how unified we all were — at least for the blink of an eye — and even commented that it was a “good thing we have a Texan in the White House.”

Because he blew it, leaving the country more divided, I believe that “ersatz Texan” — George W. Bush — is the worst president of my lifetime.

Some told me I would get more conservative after the birth of my daughter, Sofia, in 2007. Turns out, the opposite was true.

Because my baby girl will be one day be a young woman and a lady, gender equity is is an important issue to me.

Because I want to leave her — and her children and children’s children — with a better planet, I have become increasingly aware of the environment.

And whether or not you believe climate change/global warming is a human-made or some strange natural phenomenon, it should not change the idea that we can work together to do something about it “in the now” by simply recycling and eating less meat and carpooling and using public transportation in lieu of driving.

And don’t get me started on holding the oil industry and other major polluters accountable.

While my liberal playbook — and a few viewings of “Bowling For Columbine” — always had me advocating for stricter gun control, it got more personal after the Sandy Hook tragedy. The young victims were around the same age as Sofia, and I have been passionate about strict gun control ever since.

While I would never own a gun, that doesn’t mean I want to go door to door and take guns away from sane and responsible gun owners. I merely want them taken away from those who have no right being in the same hemisphere with firearms, and I refuse believe it is impossible to work toward that goal — just like it always was, and remains, possible to make the roads safer with better-made vehicles and ongoing enhanced enforcement for evolving scourges likes distracted driving.

Like climate change/global warming, my mind is boggled about gun control being a political wedge issue.

However, I don’t believe in absolutes. That would make me closed-minded, and therefore not a true liberal (look up the definition).

On the local level, I have voted for nearly as many Republicans as Democrats,a nd I have done so with no regrets. That includes Sam Katz when he ran for mayor of my hometown of Philadelphia, which I believe would have been better off had he won in 1999.

It certainly would have been a safer place  to live and work, which my wife does.

This brings us to the subject of law enforcement. Since residing in Montgomery County, I have voted for the best person for the job — regardless of party affiliation — for the offices of district attorney and sheriff.

And, as it turns out, my choices have always been Republican.

I was proud to pull the lever for Eileen Whalon Behr, who I knew well from my hitch as the crime reporter for the Times Herald, and I was even more stoked to see Russell J. Bono come out of a short retirement from the Norristown Police Department to take her place.

I worked closely with Russell while I was covering the crime beat, as he was in the final phase of his career with the NPD, that being the chief during that time. We developed a mutual respect and a friendship that transcended our political differences (such as the Second Amendment).

When I was promoted to managing editor, he was one of the first people I called, and he gave me a vote of confidence.

When he retired, I gladly penned a column and a story about his career.

When my own journalism career came to an end, he was one of the first people I reached out to and he was again beyond supportive.

Those are times you don’t you don’t forget, because you find who your friends are.

When he decided to run to retain the office, I put aside party affiliation — as everyone should when it comes to enforcing the law — and asked what I could do to help.

I don’t know all that much about the opponent. Frankly, I don’t need to know much because Russell J. Bono — as a lawman and not a lawyer — is the right man for the job.

As a career lawman, he is an artisan of his craft. What always amazed about him, despite his years on the job, is that he was never jaded enough not feel sincere compassion for innocent victims

That is why I have gladly accepted the position of Chairman of the Democrats for Bono committee.

Whether you are a fellow Democrat, an independent or an on-the-fence Republican, I ask for your support.

1 thought on “A Vow From The Chair”