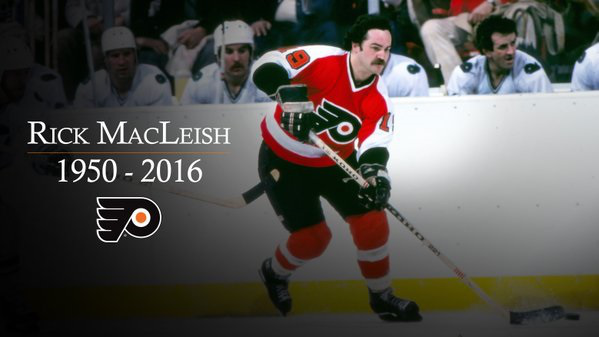 Been giving a lot of thought lately to what it means to grow old.

More or less, I still love – or at least like, or am bemused by – the same music and television shows from my youth (while picking up some strays along the road of life).

I am still given to bouts of unabashed to immaturity, often manifested by practical jokes with Sofia serving as my assistant.

Yeah, there are the physical reminders – less hair up top and more girth in the gut.

And I am mastering the art of small talk. I can do the wave and nod thing and the final plunge of discussing the weather and traffic patterns.

But I think we age as we lose drip on our youth.

Listening to Bruce Springsteen 24/7 won’t halt that that inevitability.

No one gets out of here alive.

By the time we lose our friends, well, you don’t need a calendar to tell you how old you are.

Rick MacLeish was not a personal friend of mine. I met the man twice. Once, I wait in long line at car dealership – Matt Slapp Something or Other (I think Chevrolet, but don’t hold me to that) in the Northeast – but they hustled us all through the line pretty quickly.

My heart pounded as I approached. He quietly asked my name and I stammered with a response. He proceeded to spell it incorrectly – G-O-R-D-E-N – which is actually amazing, considering the number of people named Gordon, like Gordon Lightfoot, from his native Canada.

Because of the length of the line, my impatient stepfather told me he would be back to pick me up. Because of the precision of the movement of the line, he was nowhere to be found when I was done. So, I did what any stupid 9-year-old would do.

By the time I got there, the late autumn chill had taken its toll and my mother put me in a warm a tub. I didn’t quite understand my stepfather’s panic when he got back to Matt Slapp, but I can only imagine how I would feel – actually I can’t – if the same thing happened with Sofia if she were waiting in line for an autograph from Becky G (her second-favorite teen idol behind Sabrina Carpenter).

When he saw me in the tub, he couldn’t get too mad. I was home. And, really, he should have waited and he knew it.

But this was 1974. Parents didn’t see child abductors lurking on every corner. We played, out of view, until dark.

All was forgotten and I went to bed happy, despite any panic I caused. I had interfaced with my second-favorite Flyer – Bobby Clarke was like Secretariat pulling away from Sham in the Belmont Stakes – and I had his autograph (I had Clarke’s too, but it was not from a personal encounter).

The second meeting with MacLeish was a bit different. I was acting in a professional manner as working member of the press at the Philadelphia Sports Writer’s dinner in Cherry Hill. I walked out of the press room to look for Tommy Lasorda (I worked for the Norristown paper, and we were required to write about Lasorda whenever he passed gas) and almost collided with someone around my own size.

He politely said “excuse me” and timidly stepped aside. His face, like any of the Broad Street Bullies, was unmistakable.

“Rick MacLeish,” I pronounced, much more confident than when I was nine, introducing myself as he shifted his beer to his left hand and shook mine.

We spoke for about five minutes, tops, during which I did most of the talking in a quiet corner where there were so many other Philadelphia sports icons walking around that no one would have even noticed.  I told him he was my second-favorite Flyer, about the Matt Slapp incident and how I spent hours in my garage trying to replicate the quickness and power of his surreal wrist shot.

I also told MacLeish that whenever my father manage to get tickets for a game – no easy task in that time frame –  he always scored a goal, and that I even saw a hat trick or two.

He quipped that he would have gotten me season tickets if he had known.

We also talked about the goal he scored against the Boston Bruins in Game 6 of the Stanley Cup finals, which held up for the duration in a 1-0 win. He explained that the deflection was not an accident. He explained that he and Andre “Moose” Dupont tirelessly worked on it in practice. Dupont would shoot it about an inch off the ice and he would deflect it. By the time the situation arose in the game, it was like second nature. For the first time in a game situation, it worked.

He joked that the other power-play point men, Bill Barber and Tom Bladon, shot too hard to spend time on it with them but that “Moose shot it nice and slow, but accurately, and could only get it as high as around the ankles anyway.”

I saw Lasorda – actually, I heard him, too – from the corner of my eye. I was promised five minutes to do a power interview, so I had to excuse myself. MacLeish shook my hand again (hockey players were always gentlemen) and blended back into the crowd from which he came.

I spotted him again, alone in a corner of the VIP area, and thought about resuming the conversation. But I had a story to write, and wanted it out of the way before the dinner, and I didn’t want the man to think I was some sort of a stalker.

So, those are my Rick MacLeish stories. It might be a sign of age, but neither is ever told that often.

From time to time, I would run into someone from overnight camp or somewhere else in my youth, and they would luckily remember me more for my wrist shot than by buck teeth and Jewfro.

My response would be that “I got it from watching MacLeish.”

And I starting watching MacLeish again.

Part of staying young, I suppose, has been some small semblance of computer literacy. The Flyers’ first of two cups is recalled most by the final series, with Clarke winning Game 2 in overtime and MacLeish’s tally in Game 6 that goalie Bernie Parent would preserve, but they got there by edging past a New Rangers team in seven games that was probably better than Boston.

I found Game 7 of the Ranger series on You Tube and what immediately struck me was how dominant MacLeish was in that decisive contest.

And after he passed away this past week at age 66, I watched it again. The whole thing.

It made me feel young.

It made me feel old.

Most of all, it made me feel he was worth that long walk home.