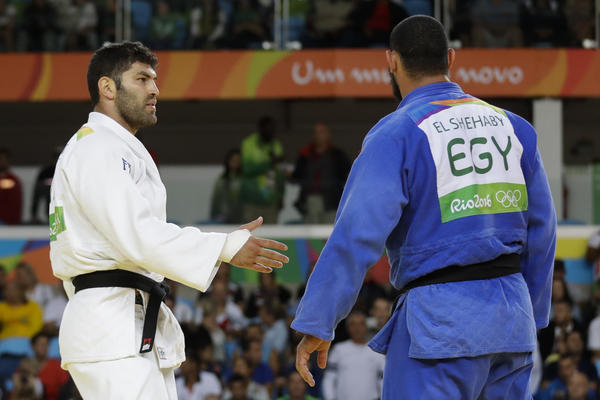 GORDONVILLE — In a perfect world, the now-completed 2016 Summer Olympics in Rio should have been a rallying point in Casa de Glantz.

No more fighting for the remote when it is time to decide between “The Bachelor” or a sporting event. No more zoning out when an obscure topic comes up at the dinner table.

With Sofia now 9, these were to be the first Olympics when she really could fully comprehend what was happening up there on our new 60-inch screen.

And even though I’ve gained the smarts to work the Smart TV, I figured Netflix would have to take a break for the Olympics.

But something happened on the road to Rio (yes, I’m aware of the movie by that name).

HBO’s “Real Sports” kept it “real” and shed light on the dark underbelly that is the whole Olympic syndrome we buy into every two years (Winter Olympics come two years after the summer these days, so that we stay nice and inundated with the concept of good will through sport).

Exposing the exploitation tactics of the International Olympic Committee (IOC), Real Sports confirmed a semi-quelled inkling that sports journalism may now be the standard-bearer of the once great fourth estate.

And it turned me off, just about completely, to any interest in the Rio games, while serving as a stark reminder that an event designed to make the world seem perfect is a delusion.

But then I had to consider my 9-year-old ultra-precocious daughter, Sofia, who was going into the Games buoyed by a Lifetime movie on Gabby Douglas she had seen on Netflix after a long détente over what to watch once the Smart TV riddle rhymed.

She was deeply interested, and asking a lot of questions. When it comes to all things sports, whether I know or not, I’m the Answer Man around here.

As it was, the two most televised sports in the first week were gymnastics and swimming. Sofia, inbound for fourth grade, has been taking gymnastics since the summer after Kindergarten and has been taking more serious 1-on-1 swimming lessons this summer.

She was doing her own “routines” in front to the TV, and pretending to swim back and forth. It was too cute, and too reminiscent of what I used to do – often in full costume – when I watched sports. (Confession: I still watch the Eagles in a jersey and hold a now half-deflated football as a comfort toy.)

So I put all disgust from the “Real Sports” segment on the shelf and watched with her, even when Mommy and Nana slithered away from the scene.

This is what we Dads do.

Sofia was cheering for Douglas, after seeing the aforementioned movie, but I reminded my half-Jewish daughter that she needed to hold a warm thought for team captain Aly Raisman. We also cheered for Michael Phelps to make history, were amazed by Katie Ledecky and couldn’t understand how and why Sweden would be formidable in swimming when the other more “winter” countries (Norway, Switzerland, Denmark, Austria, Finland, etc.) were struggling to get on the radar in any event.

It brought back memories of my first real Olympics experience: the Munich Games of 1972.

I was 7, and my whole world was sports. I remember watching from the couch for much of Mark Spitz’s exploits. I also remember being on “vacation” in Washington, D.C. for the end of the Games, and trying to understand – as much as I could at that age – what was going on when the Israeli athletes were taken hostage and murdered by Palestinian terrorists.

At the time, I thought the subsequent theft of the basketball gold medal from the U.S. men’s basketball team was more egregious, but I soon came to learn that it paled in comparison. It came full-circle when I read a Doug Collins interview stating that what had happened to the Israelis pretty much dampened the spirits of the team and that they “just wanted to go home” as much as play that gold medal game against the former Soviet Union.

Olympic officials tried to separate sports from politics, but they were proven – just as Hitler’s Berlin Games of 1936 and the black power salute of Tommie Smith and John Carlos on a Mexico City medal stand in 1968 or the mass boycott of the Moscow Games of 1980 did – to be impossibly intertwined.

That’s the one aspect of the modern Olympic Games in which the spirit of the ancient Greek Olympiad cannot be recaptured. In those days of yore, with the likes of Plato and Socrates among the honored spectators, there was a mandatory cessation of regional hostilities to allow for safe passage of soldiers to travel and be able to compete.

How and why could that have been the case in a supposedly less-evolved time in history? Maybe because the ancient Olympics also had a spiritual side.

They believed the Gods were watching.

These Gods probably looked away in disgust sometime between the full-time modern revival in Athens in 1896 and the stripping of Jim Thorpe’s 1912 gold medals in 1913.

Although smoke-and-mirror productions – like the grandiose opening ceremony in Rio –  can put a proverbial bandage on a gunshot wound, the internal bleeding had already begun behind the scenes.

And it was clear there was no cessation of regional hostilities to allow safe passage – even to the opening extravaganza.

That night in Rio, members of the Lebanese delegation refused to share a bus with the Israeli team.

And so it began.

A female representing Saudia Arabia, which has a poor record on women’s rights, withdrew from the judo competition rather than risk having to compete in the second round against an Israeli, Gili Cohen. (If the Saudi didn’t want to compete, her name doesn’t deserve to be mentioned.)

On the men’s side, in judo, Israel’s Or Sasson was graced in competition by Egypt’s Islam El-Shehaby. After Sasson scored what is the sport’s version of a knockout (or pin), Sasson’s fervent attempt at a handshake was rebuffed. While the crowd jeered, the referee ordered Shehaby to take the customary bow and eventually got a feeble nod.

The action was a post-script in most places. Given the volatile nature of the Middle East, who wants to take sides, right? Decried in the Israeli press and met with passing disgust in the U.S., excuses were initially made by officials (the IOC has a history of anti-Semitism going back to Hitler’s games).

In a delayed move, El Shehaby was sent home by his own country – likely to a hero’s welcome, which he will need to avoid the shame of losing to a Jew.

And make no mistake about it, this is what this all about.

Recognition, and treatment of the Palestinians, are just easy excuses. It is the same reason Israel has a harder time qualifying for the World Cup in soccer or the Olympics in basketball. Instead of competing against nations from its own region, it has to compete against European nations because neighboring countries refuse to compete.

Meanwhile, the “Real Sports” report delved into safety in Rio. During the games, there have been incidents, up to and including U.S. swimmer Ryan Lochte and teammates half-concocted their story about being held up at gunpoint (it was kinda sorta true, but not really, and yet another controversy that got a ridiculous amount of mainstream media coverage while Louisiana literally floated away).

According to Associated Press, these other incidents include the following:

While all these actions pale in comparison to what happened in Munich, just think of the mileage – the positive international press – that would be generated if the animosity was dropped, like when there was a cessation in battle in the ancient games, if something as simple as a shared bus ride and a handshake and man-hug occurred.

We know that would play well in, say, the UK or Canada or Australia or the Netherlands. But it would be seen as a national disgrace in places like Lebanon and Saudi Araba and, yes, Egypt (treaty or not).

How do I explain all of this to Sofia, when she is watching with the same wide eyes I once had?

I want to tell her all, and one day I will, but Olympic moments – like the so-called 1980 Miracle on Ice (I personally don’t think it was quite the miracle it was made out to be) – should be coveted before her innocence is lost.

For now, I suppose I’ll keep it simple.

And do what we Dads sometimes have to do.

I’ll say the Gods are watching.