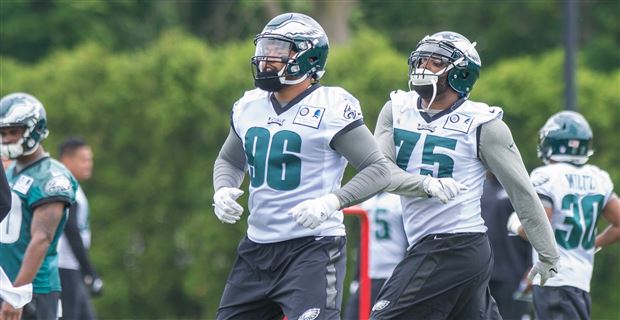 GORDONVILLE — In high school, I was more freak than geek.

In adulthood, well, another story.

If my adoration for Star Trek isn’t enough, I often prefer documentaries over movies – especially if the movies in questions are sequels to sequels of rebooted sequels full of car-chase scenes, unrealistic fight sequences and gratuitous violence.

Then there is sports. I was always fascinated with drafts – all drafts, but football in particular.

I remember running home from school, turning on KYW and waiting for a report on the NFL Draft (I’m old enough to remember it being on a weekday and not in prime time). I was glued to the TV when the draft was broadcast on ESPN for the first time, and fascinated to learn – from a fellow counselor at Blue Bell Day Camp named Bill – that there was this thing called the “Ourlad’s Guide to the NFL Draft.”

Yes, I’m a draft geek, which put me in the Fantasy Football realm (always downhill after the draft).

That may be why I’m one of the few who boldly goes where no one with a life goes and watches as many preseason football games as possible.

And when it comes to the Eagles, well, I go one step beyond. From the VCR of yore to the DVR methods of the present day, I make sure I gather all the worthless knowledge I can about undrafted free agents with as much chance of making the team as I do.

With the 2017 preseason upon us, and the first glimpse of new faces – or others in the limelight of expanded roles – it is a time to dream through the eyes of others.

But through it all – and through my training as a journalist – I can keep it real, too.

For every longshot that snares the last spot or two on the 53-man roster or turns up on the practice squad, the fortunes of the Eagles and their championship drought dating back to five years before I was born are going to ride on the shoulder-padded shoulders of players who need to live up to their advance billing.

At present, I have the Eagles anywhere from 6-10 to 10-6. That’s a big gap, especially since 10-6 would likely mean at least a wild card berth in the playoffs.

I also expect a lot of close games – games that are decided not so much by the final score but by the few key plays that turned it around one way or the other.

Who needs to make these plays, making the difference between 6-10 and 10-6 and all points in between?

1) Carson Wentz, QB: “Ah, come on,” you say. “Cut the kid a break.” Nope, can’t go there. That was last year. Wentz only started a season and a half in college. And while he led North Dakota State to a pair of national titles, it was at a lower level than Division I. The 16 starts last year were bonus time. Now we need to see some progress. Wentz has all the tools – size, arm strength, mobility, leadership skills and what has been billed as a photographic memory – but the football graveyard has a whole section for quarterbacks buried after the same obituary was written. Last year, especially early, we saw a glimpse of the possibilities. But we also got a heavy dose of reality. While he took almost every snap, learning on the job, we learned that his mechanics were so off that it was painful to watch. And in this system, the West Coast offense, he needs to do two things that Donovan McNabb subsisted on (despite being woefully inconsistent on short- and medium-range passes ): throwing a deft screen pass and being fairly accurate on the deep ball. Last year, we chalked up Wentz’s misfires to inexperience. This year, with an offseason to work on it with a quarterback guru, and with Darren Sproles to catch screens and newcomers Torrey Smith and Alshon Jeffery to get open deep, the franchise quarterback is under both a microscope and magnifying glass to get the ball into those hands.

2) Zach Ertz, TE: Here in Philly, we sometimes get caught gazing at our own bellybuttons. When that happens, we are prone to think the guys in green are more impactful than they truly are in the overall picture. Here is where the Fantasy Football geek in me pays dividends. I know, from my own painful experience with Ertz and from the litany of Fantasy draft guides I read, that Ertz – a non-entity as a blocker in the real world – is in the upper middle class of tight ends (i.e. not in the top 10, but not quite middle of the pack) when it comes to receiving production. The major issue here has been the Red Zone. Out of 17 targets – more than one per game (he played in 14) – Ertz had four touchdown catches in 2016. The year before,  he had just two. There have been injuries and excuses made, but the fact is that a one-way tight end with his size and the skills he has flashed should be a security blanket for a young QB. That’s what Ertz needs to be, and not just in a double-digit game or two to pad his statistics. Stay healthy, get open and catch the ball. Two-way tight ends are coming back into vogue, so his time in Philadelphia – let alone the league, at least as anything more than a role player – could be more numbered than we realize on the surface.

3) Derek Barnett/Vinny Curry, DE: Violating two rules here: 1) putting undo pressure on a rookie, like Barnett and 2) cheating a bit by putting two guys together in one entry. However, the Eagles went into the offseason desperate for an upgrade at cornerback and had the good fortune of a draft that was deep in corner prospects. Some teams chose to use that depth as a reason to wait, but it was a luxury the Eagles could not afford. The wiser move – particularly after some surprises in the 13 picks before them – was to swim against the tide and take Marlon Humphrey (Alabama) or Adoree’ Jackson (USC) or Garreon Conley (Ohio State). Instead, they went with Barnett, who was clearly the guy they had fixated on all along. The thinking was that a relentless pass rush was the panacea for sub-par corners trying to hang with super human wide receivers. And let’s be honest here, they are placing all this pressure on Barnett because Curry, despite a hefty contract that says otherwise, has not consistently produced (especially since getting said contract) as a pass-rushing specialist. Last year, for example, the since-vanquished Marcus Smith had as many sacks (2½) as Curry. In fact, nine of Curry’s 19 career sacks came in 2014. In football years, than may as well be 1914. So now we have Barnett, whose name comes attached with Reggie White because he broke White’s sack record at Tennessee, being asked to step in and be in contention for NFC Defensive Rookie of the Year in order to justify his choice. Since the pick, I have gone back and watched some Tennessee games on the SEC Network (total geek move, I know), and he was an absolute beast. Not only did he make plays, but he did it at key times. Let’s hope that carries over, as the Eagles went for a corner in the second round, Washington’s Sidney Jones, who is likely to miss the season with an Achilles injury that bumped him out of the first round. As a bonus to Barnett being dominant, maybe Curry can recapture some of his 2014 form and the two – in combination with Brandon Graham – can create enough consistent pressure to offset the still unaddressed weakness at corner. Additionally, this trio – and we can only really count on Graham right now – can free up space for defensive tackle Fletcher Cox and middle linebacker Jordan Hicks to come clean and make plays. It’s a ripple effect that needs to happen.

4) Jason Peters/Lane Johnson, OT: May as well go back and draw water from the 2-for-1 well once more, because this is really where the house of cards could ultimately stand or fall. Peters, while likely ticketed for Canton, is not playing at that high of a level anymore. At age 35, he has been to nine Pro Bowls and is a six-time first- or second-team All-Pro selection, but most of those honors now come by rote from voters who don’t see him on a play-in-and-play-out basis. Though signed through 2019, via extension from his “best friend” Jeffrey Lurie, the realistic hope is that he stays intact for the 2017 season. If he doesn’t, Johnson moves from right tackle – a spot where was becoming stone-cold dominant before leaving a 3-1 team with a 10-game suspension for his second PED strike – to left, and Hal Vaitai moves into the right tackle spot. Then again, given Johnson’s history, he better not take even a Tylenol without a team official present. The Eagles really need both bookends on the field. If that happens, the run game will be effective enough that Wentz won’t have to throw 50-plus times per game.

5) Caleb Sturgis, K: Snicker at a kicker all you want. Your smiles will turn to frowns if he costs you a game – or two or three or five. There is no reason to suspect Sturgis won’t continue to be solid (135 points last season on the strength of an 85.4 percent accuracy rate), but we are talking about delicate geniuses here who usually wear out their two- or three-year welcome and need a change of scenery to get their mojo back. Consider this a preemptive warning that the meter on Sturgis – unless he is more Justin Tucker than Alex Henery – is running in his third year in green. Assuming he does not regress, it is vital he hit as many makeable kicks as possible while showing he can hit from a distance (53-yard long in 2016 and 55-yard long last season). In close game, a missed or made field goal can make all the difference between crying in your beer or raising it in victory.