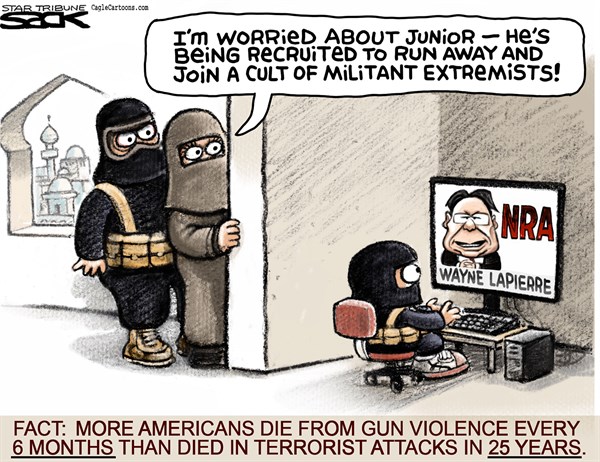 To reach the expiration date on when it’s not “too soon” to talk about America’s gun addiction after a mass shooting, that’s what.

We all know the typical protocol.

It’s been the same modern-day response, going to back to 1984, when unemployed security guard James Oliver Huberty opened fired in a McDonald’s in San Ysidro, Calif., killing 21 and wounding another 19.

The sordid history of systematic silence continued with Edmond, Okla. (14 dead, 6 injured) in 1986 and a school playground in Stockton, Calif. (5 killed, 29 injured).

These were all enough for his right-wing holiness himself, Ronald Reagan, to come out against semi-automatic weapons.

They even put a silencer on that one, though.

Post-Columbine, mass shootings became so commonplace that you could put loose change in the D.C. jukebox and get the same sick song – with lyrics like “nothing could have stopped it” and “if a bad guy wants to get his hands on a gun, he will” and the chorus of “it’s too soon” to discuss gun reform/control – that we would take extreme horror to bump the more paranoid post-9/11 fear of terrorism from the public psyche.

Instead, thoughts and prayers.

We had several tragic shootings fly under the national news radar during the Iraq War years, but it was hard to ignore after a Virginia Tech student, Seung-hui Cho, killed 32 and wounded 17 on his campus in 2007.

More admonishments against getting to the heart of the matter, even as hearts were being broken, came from elected leaders ignoring what most Americans want, which was some form of gun control/reform.

The moment of reckoning seemed to come, before it went just as fast, when 20 first-graders were among the 27 dead (hate counting to the shooter) at Sandy Hook Elementary School in Newtown, Conn.

Then-president Barack Obama made a tearful and eloquent plea that fell upon deaf ears. Instead, more loaded up guns before he came and took them away.

The year 2015 saw nine black people killed by a White supremacist while praying in a church and 14 killed and 22 injured in San Bernadino, Calif.

This year, we’re still wrapping our minds around 59 dead and 500-plus injured at a Las Vegas outdoor concert, and the president visited and cautioned against talking about gun laws, while three were killed just the other night at a Colorado Wal-Mart.

So, while we can’t even discuss one’s right to bear arms without being accused of being a communist, we can’t send our kids to elementary school or high school or college without fear of that phone call.

We can’t serve our country without fear of one of our own opening fire.

We can’t go to a night club or a concert or a midnight movie.

And we can’t pray in a house of worship – even if those prayers are for the victims of gun violence, a mandate which is always part and parcel of the “too soon to talk about it” chorus.

We can’t shop or eat lunch in a courtyard.

It is in the First Amendment to talk about our concerns, and to protest and seek change, but not when the Second Amendment is in play. That’s the same Second Amendment many of us – actually, most of us — believe is loosely interpreted to protect gun laws to the extreme that we have to shrug off not only mass shootings, but all forms of daily gun violence.

A may come before B everywhere else in the civilized world, but the First Amendment does not come before the Second in the land of the allegedly free and the home of the purportedly brave.

We are told we are trying to infringe upon liberty – even though the idea of “nothing we can do about it” infringes upon all our freedoms.

This litany mass shootings took place from coast to coast, and the shooters were almost exclusively men. While they came in all skin tones, most were white.

Some were known to have psychological issues, and others seemingly “snapped,” in such an unpredictable way that the out-of-context “improved psychological care” mantra —  from the same right-wing base that cuts those same funds — is borderline pathetic.

And it’s all to protect the sanctity of the almighty Second Amendment, and the powerful gun lobby.

The one common denominator in mass shootings (defined as four more casualties) is guns.

Smirking their smirks, they say: guns don’t kill, people do.

Actually, guns don’t kill. How can they?

They are inanimate objects that need to be loaded with ammo and pointed at a target.

And there are too many of them in too many hands.

But let’s not talk about that.

Let’s sit in the waiting room and wait for our numbers, or those of our loved ones, to be up.

While we wait, let’s look at the rules – and how they change in the right-wing narrative — for a terrorist attack carried out by a lone wolf ISIS sympathizer, complete with a weird-sounding name, who came from a country not on the president’s banned list who killed mostly tourists by running them over with a rented truck on a Lower Manhattan bike path.

But when the Halloween nightmare unfolded on the bike path, it didn’t stop the president from taking to Twitter and unleashing one of his unfiltered random attacks.

In that case, unlike Vegas, he couldn’t talk about it soon enough.

He spat spitballs at New York senator Chuck Schumer, saying the lottery program that allowed certain immigrants to stay on green cards, was a “Schumer Special.”

Actually, Mr. President, how would you like your crow cooked for that special, before eating your words.

Schumer supported the measure eons ago – way before 9/11 paranoia was spawned – and it was in what was something quite rare today — a bipartisan measure signed into law by a Republican president, George H.W. Bush.

Isn’t that a kick – or maybe a playful pat – on the butt?

Furthermore, Schumer – in the Gang of Eight — has since been part of efforts to amend that measure, only to be rebuffed.

Hard to get those facts straight at 3 a.m., though.

Guess, for once, it was too soon, huh?

Later in the day, the president shifted gears and took aim at the justice system, calling it a “joke” and a “laughing stock.”

He was talking about terrorism, and how we vet incoming immigrants and punish them (not sure how to properly punish someone who wants to die) when they are naughty. Can’t completely argue, to be honest. A lot of things needs improving, especially when the goal is to be “great.”

Still, couldn’t the same be said of how we deal we have dealt with gun violence in the last few decades?

Is it not a “joke” and a “laughing stock,” particularly in the eyes of the outside world?

I know we don’t want to let the facts get in the way of an emotive outburst, but let’s look at some basic math.

We are considerably more likely to die in gun violence (1 in 350, and 1 in 15,325 in a mass shooting) than in a terrorist attack (1 in 20 million, counting Oklahoma City, 9/11 and the most recent incident), so let’s get back on schedule with the reality check.

In the meantime, I’m still waiting.