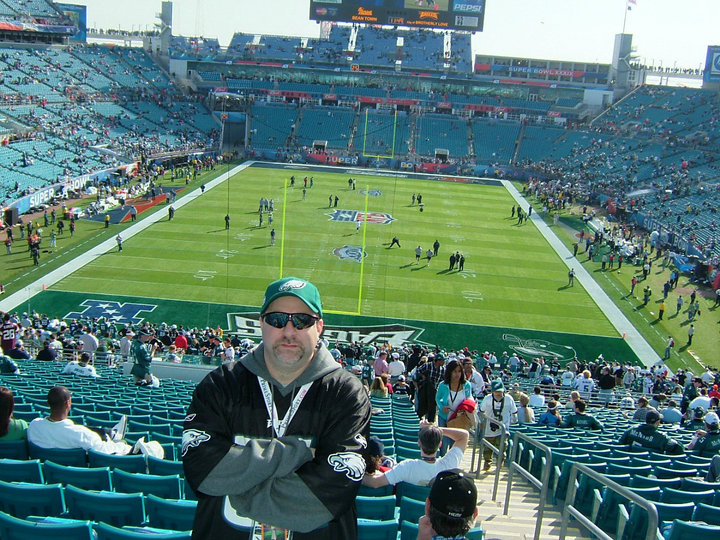 Me: “What do the Eagles do to Daddy every year?”

Her: “Break your heart.”

Me: “And who puts it back together again?”

And even though the plight of my beloved Birds is not really a blip on her personal radar screen of Taylor Swift music and girl drama, she knows what she needs to do when another season goes into the books without ultimate triumph in the Super Bowl era.

She will put it back together again.

Could this be the year? We will know soon.

I have been on this earth nearly 53 years, and 48 of them have spent consciously aware of the Eagles.

A lot of investment – emotional, physical and financial (season tickets in the family going back to Franklin Field) – has gone into those guys in varying shades of green.

There have been some amazing moments, and after an initiation of them pretty much being brutal, the Eagles have generally been a good team in my lifetime.

Since 1970, the year of my first game (a 35-20 loss to the then-St. Louis Cardinals at the aforementioned Franklin Field), there have been 16 trips to the playoffs, posting a 14-18 record.

And, as of this coming Sunday, three trips to the Super Bowl (note: four losses in NFC championship games).

But without that Lombardi Trophy, it’s really just another year where Sofia will have to put my heart back together again.

The older I get, the tolerance level for just being entertained by a team that provides a nice highlight reel goes down.

How ornery am I? I think the street celebrations after last week’s disemboweling of the favored Minnesota Vikings was nonsensical. In 1983 (my senior year of high school), when the Sixers won the NBA title, we didn’t hit the streets after the semifinals. We waited until they swept the Lakers for the title.

When the proverbial house was traded for Carson Wentz, my immediate reaction was that I didn’t care about how many franchise records he broke. I didn’t care how many Pro Bowls he was selected for, or how many MVPs he won.

If there was no Super Bowl victory in the Wentz era, the trade was not worth it. Period. End of conversation.

Maybe it’s harsh, but this is what a lifetime of heartache does to a person.

Even though Nick Foles is now playing – and playing well — in place of the injured Wentz, this box will be checked because there is no way they get here without the MVP-level play of Wentz, which positioned the Eagles for crucial home field advantage in the playoffs.

But only if Foles has one more magical game in his right arm.

People who know me and my intensity level know just how much this coming Sunday’s clash means, and they ask for an assessment with the perpetual potentate New England Patriots.

Honestly – and I wouldn’t just say this to say it — I think they can win.

It doesn’t mean they will, but they certainly can.

And if they do, it will be another one of those rare life-altering moments.

I will not be the same again.

That much I can guarantee.

It doesn’t mean I still won’t watch every snap of every game, including preseason. It does not mean I will burn my Draftnik card and not sit through three days and nights of draft coverage and endure so much analysis by paralysis that I need dialysis.

But it means that I may take the foot off the gas just a bit. If there is a game-winning field goalabout to be kicked, I won’t hit mute leave the room. I won’t lose my voice, screaming at a television screen. If the network announcers annoy me, I might not be as prone to go to the hometown radio progress and deal with the slight delay between the call from Merrill Reese and the play on the screen (all on the belief that I alone am changing momentum).

It means I might even cool it with the lucky shirts on game day, let alone keep track of their won-loss records.

It means I might tolerate fellow fans who can name less players than the number of bottles of overpriced beer they guzzle at the stadium (well, OK, I can’t promise this one without some therapy).

I will still want them to win, and win a lot, because that is just how this dude who won’t eat a cheese steak made outside of Philly is wired.

When you bleed green blood, you can’t just change your blood type.

However, a voice – the same voice that I heard after I finally saw my alma mater Temple beat friggin’ Penn State in football – will whisper softly in my one remaining “good” ear that I have not only seen the Promised Land but reached it.

If they win Super Bowl 52 (I don’t do Roman numerals, and neither should you), I’m going to buy myself a replica ring and wear it every day.

I – and long-suffering millions like me – will deserve the bling as much as the players (let alone the third assistant to the team’s assistant travel secretary). We have lived through multiple owners, coaches, general managers and players who will like to believe gave all they had for the cause.

My position has always been that I only need one championship – not that I wouldn’t take a dynasty – for my life to be altered.

I know older gentlemen who grew up as Brooklyn Dodgers fans, and they still hold 1955 – the year they actually slew the dragon known as the damned Yankees in the World Series after four previous tries – as a special moment that is enhanced by being singular in nature (the Yankees won the 1956 rematch).

Different sport, different city and a different time. But really not so different.

And there really may be no better time than the present to make it happen.

I have seen Philly teams win titles, and I have seen several others come painfully close, and a sixth sense about a team of destiny develops.

I have been there, in the pit of numb despair.

Sofia will put my broken heart back together again.

But wouldn’t be amazing if her Daddy was such a changed man that it was no longer necessary?

1 thought on “Waiting on My World to Change”