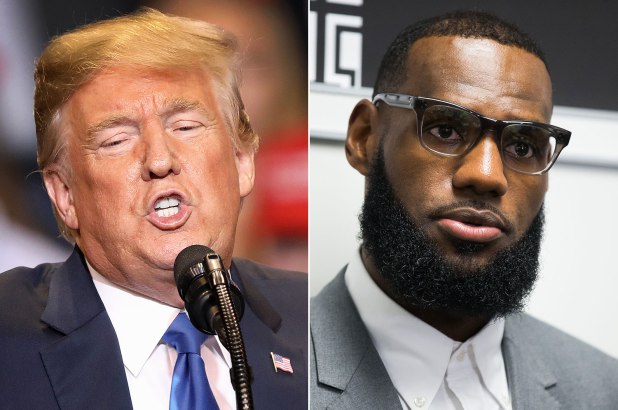 GORDONVILLE — Everything is a situation.

That phrase comes up from time to time during NYPD Blue, an all-time favorite television program of mine that was the subject of a recent binge-watching session.

And my life experience is that the phrase holds true to form – certainly much better that what it is or is not the hard truth or who is or is not right or wrong at any given moment.

In an interview on CNN, LeBron James accused Pres. David Dennison – aka John Barron, aka John Miller — of trying to use sports to divide the country, and Mr. Thin Skin couldn’t help but respond.

In a hissy-fit response on Twitter (yeah, that’s what we’ve come to in this ongoing situation in our broken nation) stating that James is wrong – kind of like how he rudely bellowed wrong, repeatedly, when Hillary Clinton was trying to speak in a debate – he is not wrong.

And in this situation – sadly – it seems like it was a much larger umbrella under which sports falls.

It is joined there with other forms of red meat that Dennison/Barron/Miller throws to his rabid base – from supporting the Second Amendment to saying “Merry Christmas” is vital to combat a contrived war on Christianity to being inhumane to other humans seeking asylum here (just like so many of our ancestors did back in the days of alleged greatness).

Dennison/Barron/Miller pulls out this well-worn stunt when putting himself on tour in friendly Deplorable terrain in a blatant — and pathetic — act of self-affirmation.

This is all coded language, and it’s meant to divide – not unite – at its rotted core.

The sports part of it predates the regrettable results of election, where the perfect storm of the arcane Electoral College and an uninspiring Democratic candidate with a virtual mannequin as her running mate led to the surprising outcome, as it goes to back to the summer of 2016, back when his election seemed unthinkable. That’s when former San Francisco 49ers quarterback Colin Kaepernick began not standing (he sat the first time and then kneeled, out of respect to veterans) for the national anthem.

My personal feeling — other than that “This Land Is Your Land” should be the national anthem — was that Kaepernick was probably protesting the fact that then-49er coach Chip Kelly was starting a middling white quarterback, Blaine Gabbert, over him for the third preseason game (a sign that Gabbert had won the job) than he was any major injustice to people of his race. (Kaepernick is actually biracial and was raised, middle class, by white adoptive parents).

But everything is a situation.

And, whether intended for not, the situation turned into something bigger than what it was probably intended, which was the way people of color are treated by police and the criminal justice system as a whole.

For a while, it caught on. The louder the outcry, the more other players knelt.

And then, like a dance craze, it seemed to fade.

While the issue at hand became more enmeshed into the national debate, NFL players either moved on or – like Eagles safety Malcolm Jenkins – took it to another level, being constructive in addressing the issue instead of symbolic.

So when Pres. Dennison/Barron/Miller stood up in front of a crowd of trained seals in Alabama (where else?) during the heart of last football season and talked about players (“sons of bitches”) not standing for the national anthem, he was a day late and a dollar short.

It was, for all intents and purposes, a dead issue.

But what’s the difference when tossing chum to chumps, right?

And when you need to pump up those approval ratings and divert attention away from the crisis du jour, well, everything is a situation.

There were an estimated 10-15 players – league-wide – still kneeling at the time of the Alabama diatribe. Kaepernick, no longer in the NFL, was not even among them.

The next Sunday, approximately 250 players of the nearly 1,500 in uniform engaged in forms of protest that including kneeling.

They made it clear why they were kneeling, and it had nothing to do with disrespecting the flag or the troops (that job is left to White House policies that send home spouses of servicemen because they are not “legal” immigrants).

In addition to criminal justice reform and how they perceive racial bias by police in the streets, they were protesting the occupant of the highest office for dealing low blows and saying they were “sons of bitches” (meaning he was, technically, referring to all their mothers as “bitches”) who should be “fired” from the profession that they scratched and clawed to buck extreme odds to join just for choosing a form of legal free speech during the national anthem.

Turns out, just for a point of reference, that the national anthem was never a big show that required players on the field until after the NFL and the military struck a deal on a mutually lucrative ad campaign in 2009.

From my experience of going to NFL games since 1970, most people pay little to no attention during the national anthem. They are late to stand, and early to sit. They continue to talk, take gulps from their warm overpriced beers and struggle to pull up their pants to cover the cracks of their asses. If I had to guess how much thought was going into the meaning of the national anthem and the flag, I’d say very little – certainly as compared to the players who followed Kaepernick’s lead and protested.

Some may argue it’s a respectful protest; others the opposite. A healthy debate would be welcomed, but that can’t happen without leadership, both from inside the Beltway and in NFL owner’s boxes, can it?

Since 2009, we see a bit more of a dog-and-pony show – complete with military jet flyovers to elicit “U-S-A, U-S-A” chants before games — after which players of multiple races and creeds bleed side by side for fans who are not divided.

If only it could last beyond the end of the game, huh?

Instead, the players shake hands and kneel together in prayer. Everyone else goes back to their little corners in this ongoing battle.

In this ongoing situation, which has grown to include teams in those sports dominated by players of color exercising their rights as free citizens and not accepting invitations to the White House after winning championships, the broader national divide continues.

Is it just sports? No.

Are sports part of it? Yes, they are.

It has led to many of the president’s supporters going to the old fallback of saying James should just “shut up and dribble.” They may not realize that when they are going on record with such bombastic commentary, they are opening themselves up to anyone saying to them “just shut up and adjust insurance policies” or “just shut up and change the oil in that car,” etc.

We are divided – perhaps to the point of a cold Civil War – because it is beneficial for a president elected by virtue of self-made division and who will only get re-elected if he can keep it that way.

The list of divisive acts include funding the “birther” movement to prove previous president, Barack Obama, was not born in the United States (to be fair, Dennison/Barron/Miller may not have realized that Hawaii is part of the U.S.) and to saying there are “fine people on both sides” after the national disgrace that was Charlottesville.

How much more divisive can you get than that?

James, on the other hand, has the following quote attributed to him: “You have to accept failure to get better.”

That’s certainly a major difference between these two, as the one charged with the task of acting presidential never accepts failure for anything. Instead, he doubles down on it.

Hence, the lashing out at James (no comment on CNN host Don Lemon).

Fair? Let’s take a closer look, shall we?

In addition to being mentioned in the same breath as Michael Jordan and Wilt Chamberlain as the greatest basketball player of all time, James came off the streets of Akron and went straight from high school to the NBA to be paid more than $400K per week at the age of 18.

He was clearly born with amazing natural talent, but we all know – or should know – how the “Bronx Tale” axiom about the saddest thing in life being wasted talent. City playgrounds are full of guys in pickup games who were born with NBA talent who are not earning a paycheck to put a ball through a hoop.

James worked for everything he got.

But there is more.

James, who has been with the same woman for 15 years, has always been a solid citizen. He doesn’t even have a parking ticket on his record.

It would have been nice if he came to the 76ers as a free agent, positioning our hometown team for a title run, but this situation is bigger than that.

He wields as much, if not more, sway in this country as the president.

There is one difference, though. James has sent more than 1,100 kids to college. The president was busted for starting a university that proved to be, like many of his other ventures, a sham.

Yes, we are divided. Yes, sports is a part of it. Hard for anything not to be a part of it these days. Just the way you cut and chew your food or walk your dog is part of it.

Guess we just have to pick a side and ride the storm out until we’re rescued by the return of sanity.

While I personally would not kneel during the national anthem, I know which side I’m on.

This column also appeared at phillyphanatics.com