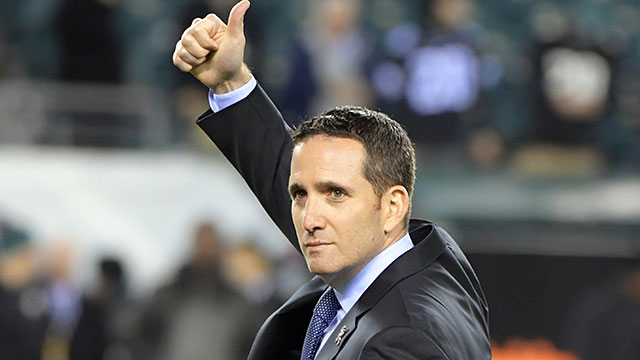 GORDONVILLE – Healthier than quitting smoking is quitting Eagles fan pages on Facebook, where vitriol for Howie Roseman for not getting every single superstar on the open market – regardless of who is on the roster and the salary ramifications – runs amok.

While Disneyland is closed due to coronavirus. Dingusland is open for business, as it is clear that as soon as Roseman descended from the podium after the Super Bowl parade in February of 2018 that went right back onto the hot seat in the eyes of too many.

The largest concern among the unwashed masses is at wide receiver, but it is not as if Roseman is wearing blinders.

The situation is this: DeSean Jackson returns as the deep threat with health questions after fans took his jersey out of moth balls only to see him limited to three games (9 catches for a 17.7 average, 2 TDs).

Alshon Jeffery, in addition to not being best buds with franchise quarterback Carson Wentz, finished last season on the shelf with a foot injury after 10 games (43 catches for an underwhelming 11.4 average, 4 TDs) and may not be ready for the start of this season.

If anyone is disliked and mistrusted more than Roseman, it is Jeffery — despite his name being spelled about 22 different ways in Facebook diatribes.

The slot receiver looks to be Greg Ward (28 catches down the stretch), the converted quarterback who broke out of the bondage of the practice squad to be more than productive. For this team, in the short term, he fits. With the double threat of Zach Ertz and Dallas Goedert at tight end (a combined 146 catches, 11 TDs), Ward can be a more cost-effective option than the dearly departed Nelson Agholor (signed with the Raiders for way too much money). Additionally, Ward provides the peace of mind as an emergency quarterback.

The only other receiver the brass will feel obliged to keep on the payroll is J.J. Arcega-Whiteside (10 catches, 16.9 averages, 1 TD, several bad drops at key times), as he cost a second-round pick out of Stanford. The reality is that Arega-Whiteside could surprise as a sophomore. He was not a reach when drafted and had an promising preseason (12 catches, TD) before not being able to adjust to the speed of the game once the regular season began. While he wouldn’t be the first bust at receiver in team history (Kenny Jackson, Mike Bellamy), he wouldn’t be the first to blossom after a tough initial transition to the NFL (Harold Carmichael, Mike Quick).

Nonetheless, I’ve heard the cries of the Iggles Idiots on the Facebook pages. As such, I’ve gone into overkill with the following mock draft. You want receivers? You got them here. There have been no projected trades, although we all know there will be. I also did something you know the Eagles won’t do, and drafted two players out of Temple.

Rationale: As tempting as it is to think about trading up for one of the top three receivers – Jerry Jeudy and Henry Ruggs III, both of Alabama, or Oklahoma’s CeDee Lamb – in a loaded class, the wildly productive Jefferson (111 catches, 1,540 yards, 18 TDs just last season) could be the most shovel-ready of the crop. Not a burner, he uses every bit of his 4.53 speed without wasting motion and can line up anywhere — outside, inside and in motion. He is compared by scouts to Michael Thomas of the Saints. We’d take that, right? What’s more, I’ll put forward another theory. Jefferson was productive at LSU before projected No. 1 overall pick Joe Burrow “came out of nowhere.” Perhaps, it was a case of the receiver – Jefferson – making the quarterback look better than he was, as opposed to the other way around.

Rationale: The Nittany Lion with 4.37 speed and electrifying athletic ability will immediately add juice to w moribund return game. Talent-wise, he would go in the late first or early second round if not for his stature. Will size matter in the NFL? If used properly, perhaps as a Desean Jackson protégé, it shouldn’t. High end? Think Tyreek Hill of the Chiefs.

Rationale: If the draft  were not a virtual event this year, the Eagles would run this card to the podium (and may not have taken Hamler in the second round if they had known he’d be there). Johnson’s family tree is made out of pigskin. His father (Johnnie) and uncle (Ron) played in the NFL, while his brother played college football. His speed (4.55) won’t wow anyone, but he brings precise in his routes and has good hands – especially on contested catches. Johnson doesn’t just have impressive size and an insane wingspan,  as he knows how to use it. Some scouts see, with time, another Kenny Golladay in the making.

Rationale: While we are not rushing Jason Kelce out the door, he has hinted at retirement the last few years. Eventually, he will say what he said at the Super Bowl parade and retire with his body intact. A replacement needs to be groomed. Hennessey has all the tools as a natural scheme fit, as he has the light feet (4.95 speed) – like Kelce – to get to the second level. Only issue is that the Eagles seem to have a strict policy against drafting Temple players (the last was safety Jaiquawn Jarrett in the second round in 2011). The last undrafted Owl they had in camp was Adam DiMechele, a fourth quarterback, in … 2009. This is of note because ratings on Hennessey, largely because of medical issues, are all over the map. Another team without an allergy to Owls might jump on him as early as the second round.

Rationale: Eagles fans will love this guy, if only because his last name is pronounced “Bocce,” like the sport. A tackling machine in college, he would likely have been drafted higher if not for a failed PED test, which may give him a chip on his shoulder entering the league. Although a two-down linebacker at the NFL level,  the Birds rotate linebackers, based on situaton, anyway. At the least, he will also add much-needed grit to a special teams unit that hasn’t been special for a while. Pro comparison? How about a guy the Eagles should have drafted in 2016 — Temple’s Tyler Matakevich  (instead of Joe Walker, who is out of football).

Rationale: Two Temple guys? The NovaCare Comlex might have to be fumigated. The brass can at least cajole themselves with Hand, since he transferred to Temple for his final year after following Matt Rhule to Baylor (after being recruited to Temple originally). The Cherry Hill West alum is considered by some the best tackling corner in the draft, which may be attributed to him having some safety experience (and he could end up there in the NFL). Hand also has been timed at 4.40. With recent acquisitions on the back end, he can be eased into the secondary while joining Bachie in immediately bolstering the coverage units. 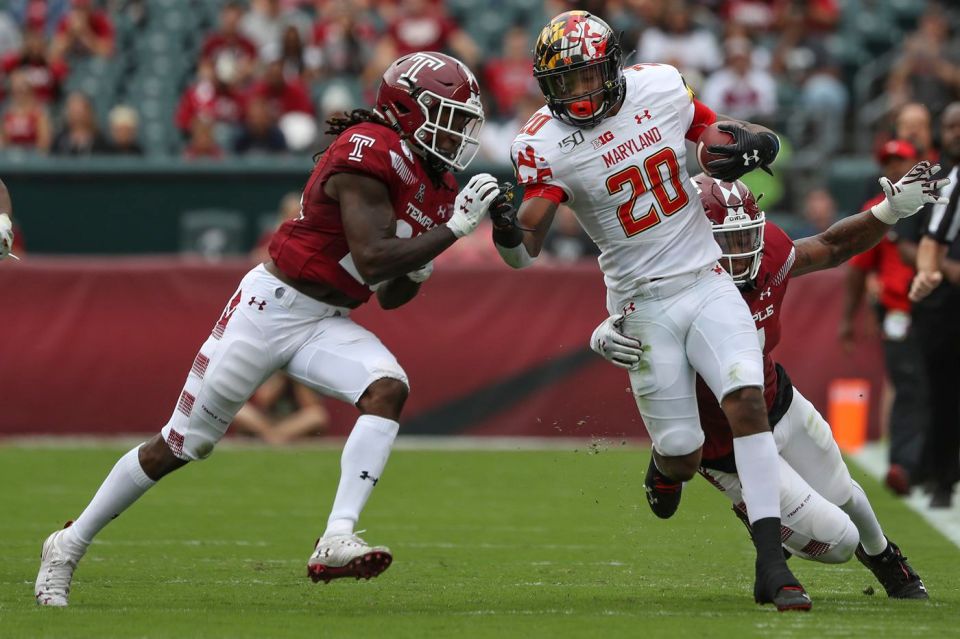 Rationale: The Eagles will likely be looking for interior line help – while likely opting for a street veteran that shakes loose from another pro roster to be the third tackle – and this class is seen as slightly above average. With that being the case, why not cast their line in a small pond to pull out a big fish with raw potential. A converted tight end, Bartch lined up in a two-point stance at left tackle in a spread offense at the Division III level. He projects to guard in the big leagues, but that is not assured (he won’t be on the active roster as a rookie anyway, so there would be time to figure it out).

Rationale: His average size is not helped by average speed, but he was productive – particularly as a junior (87 catches, 9 TDs). As a senior, in a difficult situation with the 3-9 Commodores his production dipped (47 catches, 3 TDs). Why would the Eagles draft a fourth receiver who may slip out of the draft entirely? Because new wide receivers coach Aaron Moorhead coached him at Vanderbilt, and he likely vouched for his ability to pick up the playbook quickly, which is considered his greatest asset.

Summary: This is somewhat fantasy, I admit. While multiple receivers are likely, two may be the actual limit. There would be no way they take four, but this was an exercise to show it could be done and the corps would be well-fortified for the future. There were no trades here. At No. 21, the Eagles are in a bit of a No Man’s Land at receiver. The brass could easily opt to go back, maybe to Miami at 26 or Green By 30, but they would likely lose Jefferson to New Orleans at No. 24. That would still leave tempting options like Denzel Mims (Baylor), Laviska Shenault, Jr. (Colorado) or Jealon Reagor (TCU) and an extra second round pick with which to work. I didn’t take an edge rusher, which is an annual rite of passage – usually with middling results – for the Birds. I also didn’t take a running back, although the third spot behind Miles Sanders and Boston Scott is likely to go to a familiar face (LeSean McCoy or Corey Clement), with an undrafted guy or two – i.e. Antonio Gibson (Memphis), JaMychal Hasty (Baylor), Tony Jones, Jr. (Notre Dame, picture below), Rodney Smith (Minnesota) — brought in to battle it out for the fourth spot. And, of course, there is no way they would draft two Temple guys. 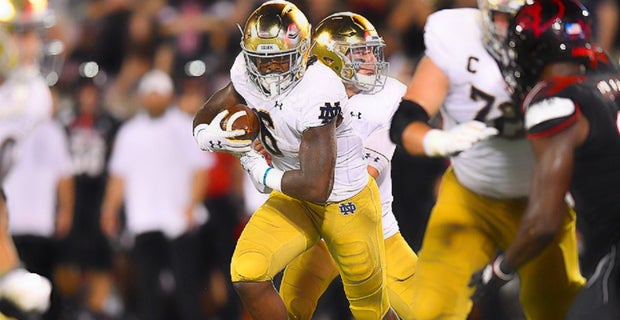