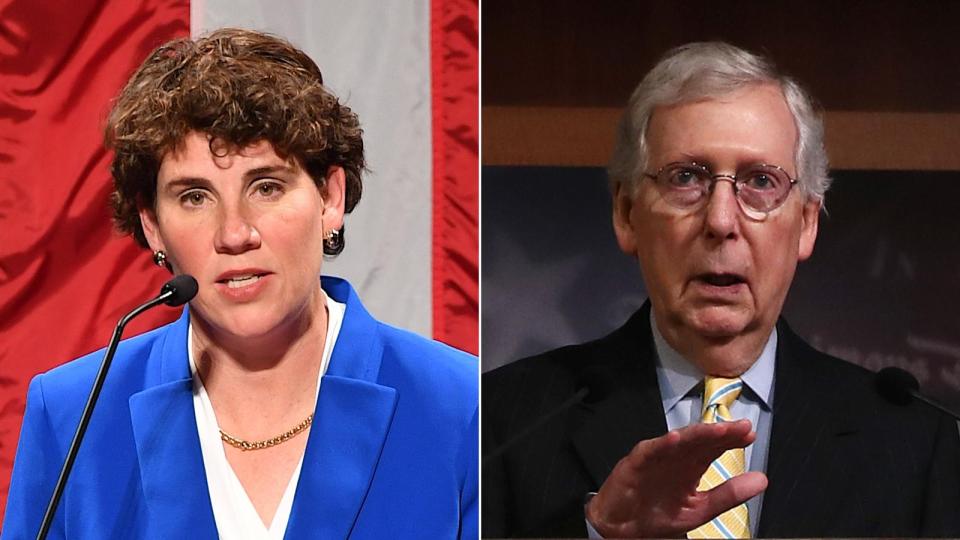 GORDONVILLE — If Amy McGrath were running for public office in more liberal parts of the country, she would only be able to keep a straight face by a being a right of center Republican.

Sane-minded Republicans, the few that have yet to be tarred and feathered for thinking for themselves, will eat up her unprecedented military service. Free of bone spurs, McGrath flew 89 combat missions during her 20 years in the Marines, breaking the that branch’s gender barrier.

Heavily decorated for her service, Lt. Col McGrath, a Naval Academy graduate, then entered politics – as a Democrat – in 2017 (even though her husband is a Republican).

Her stances on key issues – like supporting the second amendment with some baby steps with background checks — place put her firmly into the center lane, where she is careful not to make a dangerous move, lest she commit career suicide in home state of Kentucky.

Concerning your president (not mine), McGrath has stated: “I want to do what’s best for Kentucky,” adding she will support him when he has good ideas. “To me it’s not about your political party, it’s not about wearing a red jersey or blue jersey.”

In a state where it would be a shock if a referendum on going back to white and colored water fountains would not shock me, she has to walk that tightrope like a Wallenda.

She accepts climate change as fact, but with a keen eye toward what substantial legislation would mean for the coal regions of eastern Kentucky.

Not to be confused with Bernie Sanders, she is firmly behind Obamacare as is and against free college tuition.

And yet, Amy McGrath is my favorite politician right now.

Of her combat missions, what she faces now may be her most important.

With no more need to donate my $27 to the Sanders campaign for mugs and bumper stickers, I may just send some that way.

And, if you want to save the Union, you should feel the same.

She is running for senate in Kentucky against none other than Mitch McConnell, who struggles for a 20 percent approval rating nationally but is around 50 percent in the home state he rarely even graces with his presence (and allows for eastern Kentucky to remain in squalor while overwhelmingly grabbing votes there).

Your president (not mine) can’t help the fact that he is who he is, as we all knew he was who was before too many of you (not me) gave a sociopath his ultimate playroom.

It is his enablers, both in the House (before the 2018 midterms) and still in the Senate, that have collectively failed to give him his rabies vaccine.

Some know better, speaking in hushed tones under condition anonymity about how they’d like to vote for sanity, if they only could, on draconian policies.

But they fear retribution so much that they follow the lead of McConnell, the Senate majority leader, who would probably block aid to starving kittens if his lord and master – not to mention special interest groups – told him so.

I have engaged with many other concerned lefties about other contests — from Arizona and Colorado to Maine and Iowa — that could help tilt the Senate back to a place of sanity and humanity.

McGrath is currently being given a 45 percent chance of winning, suggesting a waste of money and effort, as compared to those. I get it, but the whole landscape could continue to change with what is going on currently with the coronavirus and the economy.

My argument with throwing unmitigated support behind McGrath is that a victory, seen as difficult but not impossible, would kill the proverbial two birds with one stone.

It would knock McConnell off his perch of power, and send his butt bhome.

The fact that she has built a nice war chest already, which is driving McConnell bonkers, shows that I am not alone.

Why is this so important?

Let’s recount the ways, using the book “Un-Trumping America: A Plan to make America a Democracy Again” by Dan Pfeiffer, the cohost of the podcast “Pod Save America.”

Quickly establishing that your president (not mine) is nothing but a petulant child who can’t help himself, he begins getting to root of the matter, with the scourge he calls “McConnellism” by page 13.

It boils down, as he breaks it down, to a cultural Civil War between Yes We Can vs. Because We Can.

In his position of power, he led blockades against President Barack Obama without showing any willingness to compromise, as he lone stated agenda was for him to be a single-term president

As much as the Russians and the poor timing of James Comey, he set the table for your president (not mine) to place our democracy in peril.

McConnell does nothing because it is or is not the right thing to do in his mind. That would mean he has a belief system and a moral compass in the first place.

He will hold up a stop sign simply because he can.

And that’s saying something, since we have the worst president in modern American history in the Oval Office.

So here we are, with Amy McGrath.  Her bid to unseat McConnell, and turn McConnellism to ash, may be just as important – if not more so – than the presidential race.

She’s all we have, and the best we can hope for in a state like Kentucky, so let’s do all we can to make it happen.