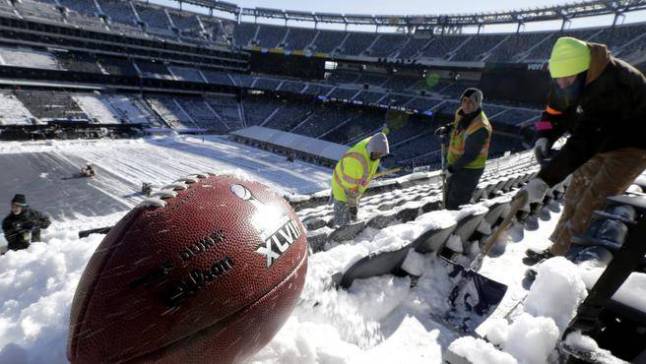 GORDONVILLE — One of the many magical aspects of being a parent is watching your little bundle of joy begin to grow into a little human being with personality traits and burgeoning talents.

For my daughter, Sofia, who is going to be 7 – with elements of 17-months-old and 17-years-old wrapped up in her persona – dancing has enveloped her soul.

Three dance classes a week – one after school and two at a local dance academy – and countless performances at home, sometimes in the kitchen in the middle of dinner or in the living room instead of practicing her piano and doing her homework.

She didn’t get it from me.

I am not a person you want to see dance – especially since giving up alcohol almost a decade ago.

It’s getting pretty ugly this week, though, as I’m doing a lot of dances.

Anything that will make it miserable on those in attendance at Super Bowl 48 (when the Roman Empire returns, I’ll use Roman numerals) this Sunday.

The National Football League, in its ongoing attempt to conspire against itself and alienate its minions, thought its Teflon veneer would protect its most holy day when the decision was made to play this year’s Super Bowl in the Meadowlands.

This is nothing against two worthy opponents – the Seattle Seahawks or the Denver Broncos – or the true-blue fans of those teams who are making the trek to the Atlantic coast in the midst of a particularly harsh winter.

Nothing would make the NFL look dumber than it raining, snowing or whatevering on its parade.

Nothing is more satisfying that making a village idiot out of a know-it-all.

This hope that it is a disaster does not come from a spirit of hate.

Actually, it is because I love the game of football. The way Sofia loves dance (as opposed to throwing a football, which is as painful to watch as me doing a Mr. Bojangles impersonation).

The NFL deserves a lot of credit for getting football past baseball – yawn – to the top of the sports mountain. But if it stays on this arrogant course, the sport is going to come sliding back down that mountain and find itself behind the likes of curling and team handball.

There is no law that says the Super Bowl has to be played in ideal conditions. It could easily rain in Miami or be windy in Phoenix.

I was disappointed at Super Bowl 39 that I had to put on a hooded sweatshirt under my No. 54 Jeremiah Trotter jersey for a game in Jacksonville, Fla.

Except for the outcome, it was ideal.

Just like extreme heat should not play a factor in the outcome, neither should adverse winter conditions.

It’s a fall sport, so fall – in February – needs to be replicated as much as possible.

So why is it in the Meadowlands?

Reach into your money clip and pull out a dollar. That’s why.

The New York market, with its media machine and elevated prices, was too much of a lure. And a little latent 9/11 sympathy doesn’t hurt either.

By comparison, Philadelphia – or Baltimore, Pittsburgh, Buffalo, Cleveland, etc. – would have no shot at ever hosting a Super Bowl.

Justin Bieber would have a better chance of scoring a TKO against Bernard Hopkins.

But the NFL could not resist taking a bite out of the frosty Big Apple (even if the game is being played across the bridge atop Jimmy Hoffa’s body).

Such a decision seemed unheard of back when the league – behind the leadership of Pete Rozelle and Paul Tagliabue – was making all the right moves. This included making its own mythical films, the merger of the NFL and the AFL, playing games on Monday night and the creation of the Super Bowl.

But now, arrogance gives way to its first cousin, ignorance.

Only the ignorant would try to get out in front of the issue of player safety but want to extend the season to 18 games without expanding roster size, which would mean more salaries.

Only the ignorant would play sloppy games on Thursday nights, all for the sake of television revenue, when any football player will tell you that three days is not enough time for a body to recover.

Only the ignorant would expand the rule book from the size of a binder to the Oxford dictionary – with the game’s nuances legislated to the point of annoyance, while not changing the basics of how it is officiated (see NHL).

Only the ignorant would sit in the comfort of luxury boxes while the commoners suffer in the cold bleachers on Super Bowl Sunday.

Can’t do much about it, can we?

NFL
ADD COMMENTS
You can leave a response, or trackback from your own site.

Mail (will not be published) (required)

This column first appeared at http://www.phillyphanatics.com